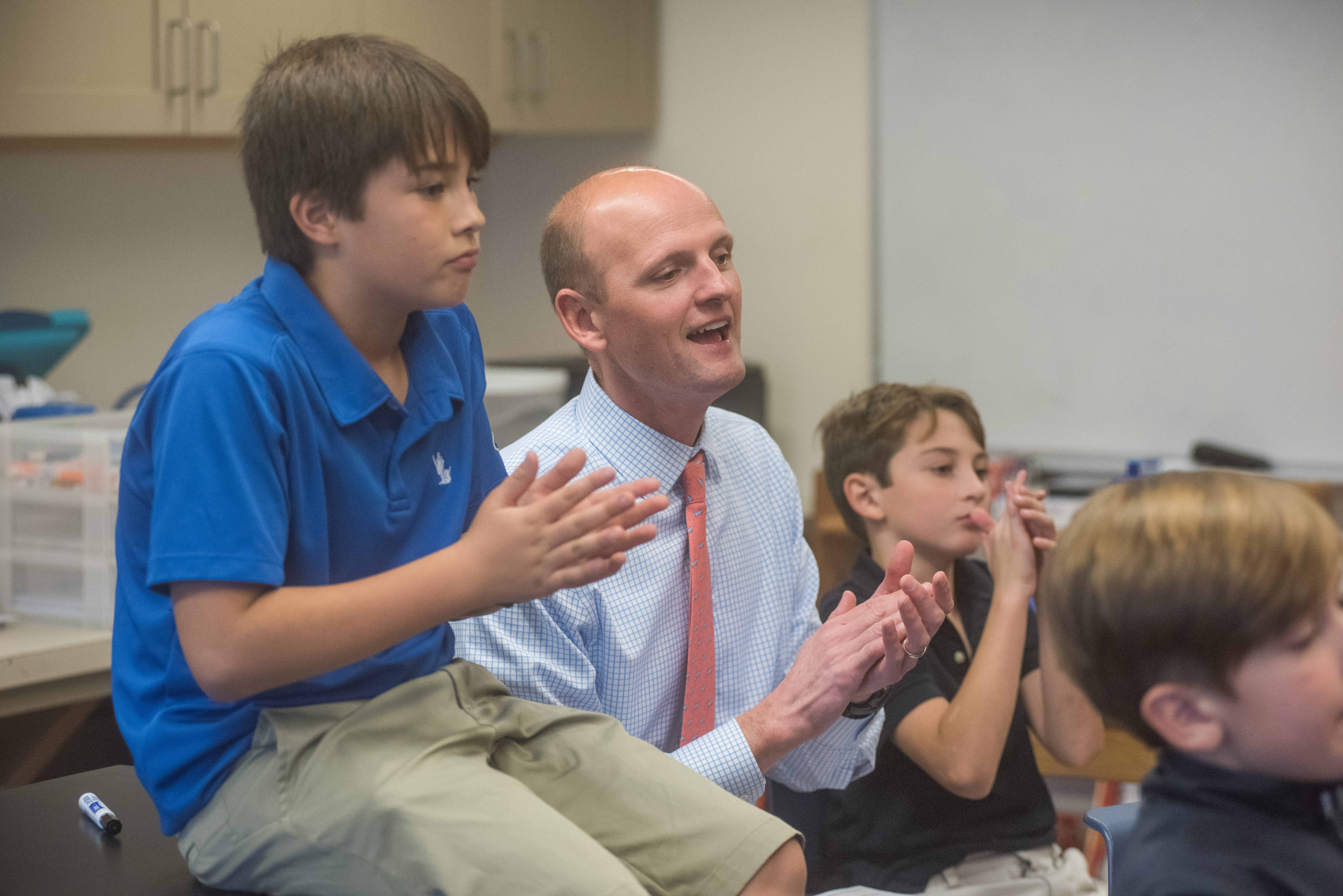 Nat Carr ’97 is chuckling at his desk in Thompson Hall, looking out the window at the flagpole on which, under the Stars and Stripes, the Fenn Gold flag is flying—upside down. “I love it,” he says, though he isn’t being ironic, which would be understandable since Nat is a Blue.

Instead, scenes like this delight the new Lower School head, who himself was once a Fenn fourth grader. Nat appreciates how seriously the boys approach this task and says that it is “an example of how we give responsibility to even our youngest students.” Each day, a pair of fourth graders, according to tradition, raises the American flag and the Fenn alumni flag, which is displayed to honor the group of young graduates that have excelled at fundraising during that year. The boys lower and fold the flags at the end of the day, then race with them into Nat’s office, sometimes declaring with dismay, “Sorry, Mr. Carr…the American flag touched the ground for a second!”

Nat took over the role of division head in September. Over his thirteen years at Fenn, he had taught science and math across all divisions, coached varsity football and lacrosse, advised students, and served as assistant director and then director of Secondary School Placement (now called Secondary School Counseling).

Nat was drawn back to Fenn after his graduation from Bates College in 2004, even though he had considered and even interviewed for a job in insurance. The siren’s call of teaching was strong, so he began looking at independent school positions and learned that Fenn had an opening. Nat happily joined the faculty and staff members whom he had once addressed as Mr., Ms., or Mrs., though it took him a little while, as it does for all alumni who join the Fenn community, to comfortably call them by their first names.

During his time at Fenn, Nat took a year off to attend graduate school at Teacher’s College, Columbia University, in the Klingenstein Center for Independent School Leadership, earning an M.A. in education leadership. His undergraduate degree is in psychology.

Nat pursued the position of Head of the Lower School because he recalled the “close knit and supportive community” in which he had spent time as a science and math teacher years earlier and because “I really wanted to get back to this age group.” Lower Schoolers “have so much energy and enthusiasm,” he says, adding with a smile, “I’ve never been so tired.” He teaches fourth grade science and has handed over his varsity football and lacrosse teams to faculty member Matt Ward ’00 so that he can coach Lower School sports. That responsibility consists of encouraging the boys “to play a lot of games like capture the flag, all with the purpose of getting everyone to participate.”

With a goal of “wanting to be really visible and engaged,” Nat has also gotten involved with important curricular topics such as “how we view homework in the Lower School,” he says. Right now, Lower School boys receive manageable assignments in two of their classes and they are asked to do outside reading. Other issues he and his faculty are discussing include iPad use and technology in general. “Devices aren’t essential; they are wonderful tools but there is no replacement for interaction in the classroom, with teachers and with each other,” he says.

The Lower School faculty spends “a lot of time together,” Nat says. The teachers “clamor to help each other,” covering someone’s classes if he or she is out sick. “They are all so supportive of each other,” he declares. Last summer fifth grade teachers participated in a Developmental Designs four-day workshop, which helped them think more about how they build routines and manage their classrooms.  The Developmental Designs approach emphasizes that there is a critical need to create a just and equitable place for children to engage in learning, and the workshop presented strategies for teachers to help students master learning routines and develop essential cognitive and social-emotional skills in their students. Out of that experience grew an activity for which boys in each Fenn fifth grade class developed and signed a “social contract” that sets forth rules for their classroom.

“They have really bought into this,” says Nat, adding that, “We are always talking about behavior and conduct in the Lower School, and constantly emphasizing the message that we want all of the boys to be really good people, to be resilient, to be engaged, and to be kind to each other.”

This training begins in fourth grade, he points out, though it happens “more organically” at that level. New Fenn fourth graders “learn about our expectations and we introduce our four core values: honesty, empathy, respect, and courage. It’s not long before the boys know them by heart and refer to them in their daily life.”

Nat loves the exuberance of Lower School boys. He says they fight to hold the door open for visitors and he loves to watch them from his office windows in the afternoon when they are waiting for their rides, frolicking on the lawn no matter what the weather is like, full of energy despite the school day that is behind them. Some boys might perch on the granite steps below and around the bust of school founder Roger Fenn; others toss Frisbees and footballs or sit, reading, next to their backpacks.

“If there are a few boys interested in something, whether it be Rubik’s Cubes, card tricks, or step ball”—a beloved Fenn tradition begun decades ago that has been revived in recent years—“they will form a club,” Nat says. He enjoys sitting with fourth graders during All School Meeting and watching them “so raptly attentive” when an older student or visitor is speaking or performing. Each day he has lunch with the Lower School, which is a noisy, happy affair.

Nat appreciates that the boys are “very open and honest, and comfortable coming to me.” One day a few Lower Schoolers were spraying each other with the drinking water hoses that are used on the athletic fields, and Nat pulled them aside. One boy denied he was involved, but thirty seconds later he admitted to the mischief and sheepishly apologized, saying, “I am better off if I say I’m sorry.”

Nat’s own experience as a Fenn boy informed the teacher, coach, and administrator he became, he says. In fourth grade, he was a member of Kathy Starensier’s ILP (Intensive Literacy Program) class. “I didn’t have a lot of self-confidence and I got such a boost that year,” he recalls. “People took an interest and invested in me for what felt like the first time in my life as a student. I became more willing to try new things. It was such a gift.” Nat says the relationships that he built at Fenn with teachers and classmates during his six years as a student were “lasting ones.”

Throughout his time as a Fenn student, Nat attended Star Camps, a summer sports camp for boys and girls ages five to fifteen, and he worked at the camp the summer before he became a student at Phillips Andover Academy and every summer since. In 2012, Nat became its new owner. “It had impacted me so much as a camper, I felt responsible for continuing it,” he says. Many members of the camp staff are Fenn teachers and alumni, and Nat says that working with the group during his college summers had a great deal to do with why he returned to Fenn to teach.

Nat’s life has changed in other ways in the last several months. He and his wife, Katie, parents of an eighteen-month-old daughter, Adelaide, welcomed baby Walter Jude Carr in December. Having little ones of his own has given Nat “a far greater appreciation for how special every child is,” he says. “It’s also taught me that kids who grow up in a community do very well, and this knowledge has impacted what we will do as our children get older.”

Helping to make sure that the Fenn “village” remains a close and caring one “is our job as teachers and coaches,” Nat declares. “We are constantly working to be better,” he adds, “and the most important job we must do is to model being good people.”