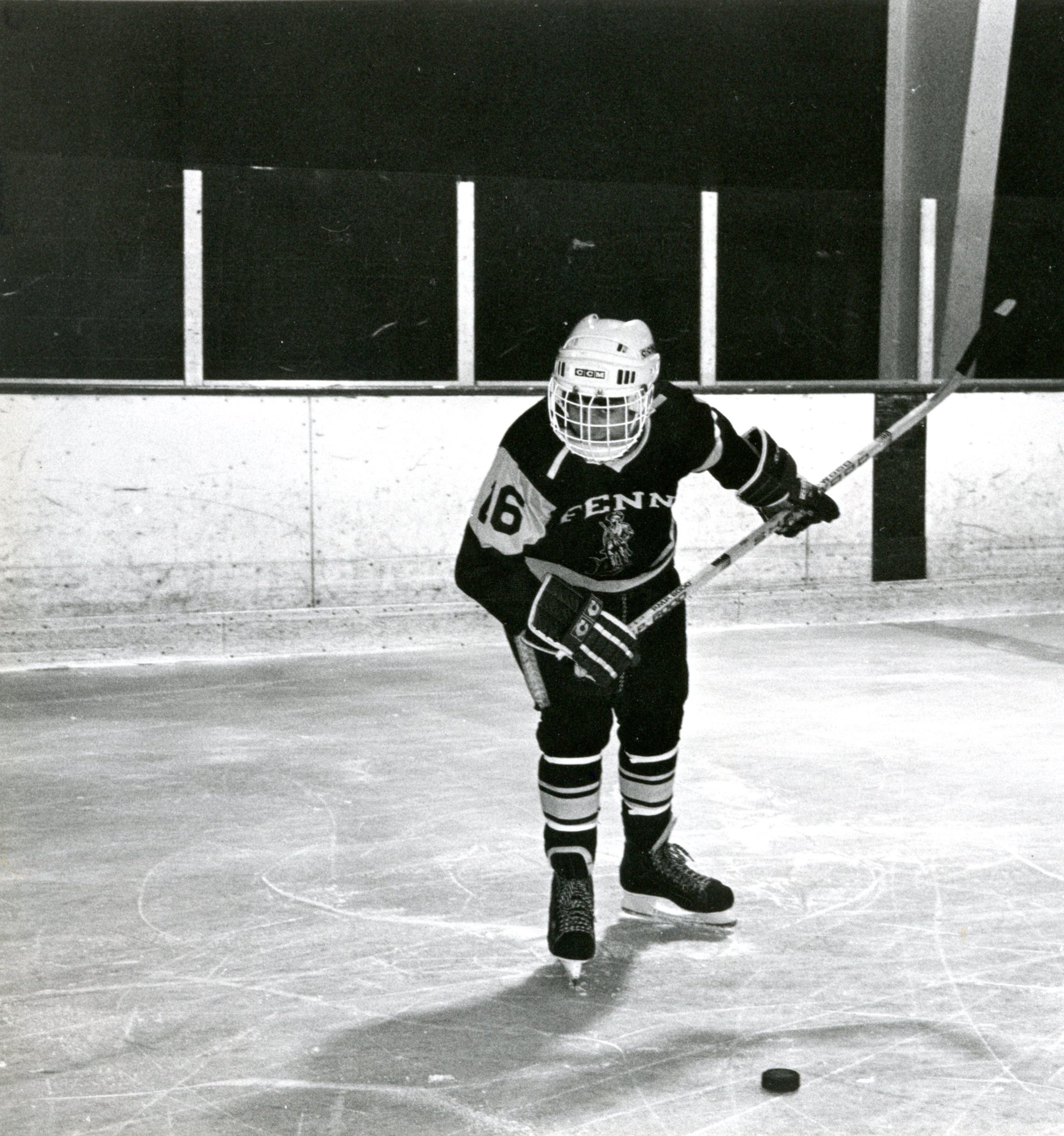 The fields, courts, trails, and rinks of Fenn’s sports program are extensions of the classroom. They are additional learning laboratories for the boys whose care we are entrusted. Sportsmanship, skills development, and character building make up the curriculum taught on that canvas. As Bob Star so eloquently reminds us, “You tell us nothing about yourself whenever your team wins, but when you lose, that is where your character is revealed.” Such character building experiences are prevalent as the lessons of the extended classroom are revealed, but the sports program also serves as a “field of dreams” where special moments are shared as they become embedded in our collective memories.

Jason Rude and I have had the privilege of guiding the middle school hockey program for over twenty years. We have grown with the program since the days of a “pond hockey-feel” for a few boys to a developmental program for the many that serves the varsity level and welcomes all players. Fenn’s Middle School hockey program is unique. It caters to all levels of ability and requires an additional effort and time commitment. The program also seeks to instill the same values of team, sportsmanship, and character building that is the hallmark of Fenn’s athletic program. It culminates with the annual intramural Stanley Can Tournament, which inscribes names on a legendary trophy. As a result, lots of sweat and tears drop to the ice as lessons are learned and egos are bruised.

Because Fenn’s Middle School hockey program welcomes all players and offers equal ice time, six grade hockey studs who seemingly have been skating since they left the womb share the ice with novice players and those who have never before laced up a pair of skates. To those novice players, homework is assigned. “Go home and practice tying your skates and putting your gear on” is a homework strategy that lessens time in the locker room and maximizes time on the ice. The inconsistency of “dress time” also manifests on the ice, as varying skill levels can make for a challenging safety environment where balancing the needs of all players—the skilled elite club player and the novice who is learning to skate backward or simply to stop remains the primary focus. The greatest hazard for the coaches on the ice is not flying pucks, but the novice who trips and flies his stick in the air or upends an unsuspecting adult.

Balancing the needs of such a wide range of experience and ability is compounded when the annual Stanley Can Tournament commences. However it is made even more glaring with the addition of an interscholastic competitive schedule, where balancing the needs of equal ice time with a competitive team are in constant tension, and where wins and losses are not as important as the game experience and the boys internalizing the lessons of Fenn’s sports program. This brings us back to our “field of dreams” or in this instance, “rink of dreams”.

Fenn’s Middle School interscholastic hockey program provides ice time and game experience to those who might be deprived of it at the varsity level. To these boys, it is the fulfillment of their hockey dreams. As such, and because of a number crunch, we sometimes rotate active and inactive players and run four offensive lines, when a typical rotation is two or three, and try to match up with the opposing team to keep things as safe and competitive as possible. The first line is typically competitive and will get a few goals. The fourth line prays for a quick whistle and a line change, and hopes any damage is recoverable. Merely touching the puck during a shift can be a triumph. But magic can happen on the ice with that group.

After the first period, the score was 4 – 1 in favor of the other team, and the fourth line gave up three of them. On the other squad was one of the higher ranked 14-year olds in the state who seemingly could score at will. To his credit, the opposing coach implored his star player to pass rather than shoot as the game progressed, in order to mitigate a one-sided rout. After two periods, the score was a respectful 6 – 2. In the last period, the Fenn boys caught some momentum with a quick goal, and when another followed, we decided to “shorten the bench”—skip the fourth liners for the more experienced players in an attempt to earn a tie. The excitement on the bench was electric, and the fourth liners were supportive as the comeback ensued. The boys were skating out of their minds with each shift growing stronger and faster. With four minutes to go, another score made the game 6 – 5 as the bench and the crowd went wild and got loud. Their top player was desperate to return to form and tried in vain to extend his team’s lead, but his legs started to get heavy. The tying goal came with just over a minute left in the period, much to the delight of the hooting, hollering, and stick banging bench. Before we caught our breath, another goal followed—Fenn was ahead 7-6 with 58 seconds to go!

Then the line change—“Ok fourth line, get out there. Bring us a victory.” Huh? Dumbfounded, those players wore faces of disbelief. Dumbfounded, the coach who managed the defensemen wore a face of incredulous shock. It seemed fitting though—our fourth liners were deprived ice time in that period, and part of  Fenn’s comeback was on account of the sportsmanship move of the opposing coach in reeling in their top player. Fenn’s top players, with humility forged from the crucible of the program, understood, and they offered enthusiastic cheers and shouts of encouragement for our transcendent fourth liners.

After losing the ensuing face off, the other team quickly moved the puck into our end of the ice. When our fourth liners got to the puck, more often they were too weak to move it out of our zone. Our goalie pushed aside shot after shot. Desperate scrambles ensued as the seconds endlessly ticked away. The 10 second countdown…puck dug out of the board…a shot…a save…the puck suspended in front of the crease…players on all sides dive to knock it… and then…the horn. Final score: Fenn 7 Hillside 6! In a celebratory frenzy, the team mobbed the fourth line and goalie. There were endless fist bumps and flailing on the ice, and then the “good game” handshake with the opponents.

The fourth line may never get a chance to lace them up again. Their hockey careers probably won’t extend beyond the boards of the middle school rink. Yet, they will always have that moment—frozen in time like the ice on which they skated. The lessons of the extended classroom absorbed. Their hockey dreams fulfilled on their “rink of dreams.”

Posted by in Dave Duane on Wednesday April, 22, 2015
Tags:  Athletics, Middle School
Like
0