Treasuring the Imperfect Boys Before Us 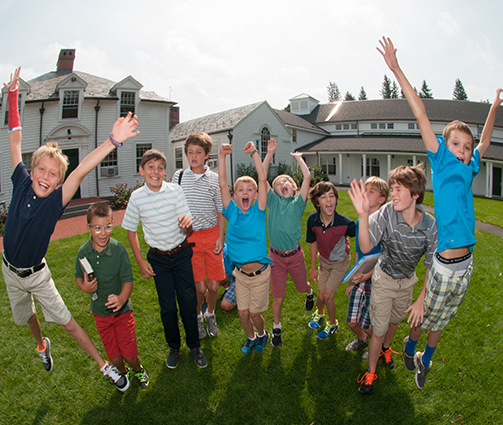 Last Friday afternoon most of the ninth graders were able to come over for our weekly get-together at the house. The fact that I said “were able to” indicates just how often many of them cannot come because of sports commitments, tutoring, and other academic and extracurricular commitments.  Several of them rued the reality of not being able to take the time out to be here eating cookies and Doritos and relaxing with their classmates even once a week. Life is very busy for them.

I usually start our time together sitting in a circle and asking them to tell me what have been the challenges and triumphs of their lives and schooling since we last met. Since Jerry and I had been away two weeks, it felt like forever since we had last been together, and I was anxious to catch up with them. I felt somewhat saddened that the major challenge they named was applying to secondary school and worrying about tests and grades and the SSATs. As one of them said so poignantly, “You could wreck the rest of your life if you screw up now.”

And I responded with as much certainty and kindness as I could, “No, you cannot screw up the rest of your life—no matter what happens here at Fenn.  This is just a small segment—a very small segment, God willing—of your life, and it will matter less and less as you leave it behind to forge an adult life. It matters somewhat now only because it is one, small step towards your future. It matters more than anything else that you enjoy your time here and each other and stop worrying so much about your future.

I know many of you who aspire for the best and the most wonderful experiences for your boys are probably nodding your heads saying to yourselves, “Easy for you to say, Lorraine. Secondary school admission is competitive, life is competitive, and our sons need to start making their marks now to ensure their futures.” The truth is, they don’t—at least not to the level we think they do. As someone with three grown sons of my own and twenty years as a Class Dean at Wellesley College advising close to 3000 students over my time there, and more than twenty  years of advising and teaching middle and high school kids, I would argue that the remarkable truth about life is that our children and we can reinvent ourselves over and over again, that we can and do pick ourselves up and start over again after what seems like insurmountable failure, that we can come to love and success  in many different ways and at many different junctures in our lives.

If I told you how many times Jerry and I have met Fenn alumni out there in the world who are doing extraordinary, creative, and passionate work—successful by so many traditional measures of success—who  were, as Tricia McCarthy might have described them “a mess at Fenn,” you’d tell me I must be exaggerating. But I am not. If I told you that it was never possible to predict who would end up hugely successful in life by their grade point average at Wellesley, you would be likely to say that cannot be true. But it is not.

This came home to me last summer during the wedding of my youngest son Matt. As parents of the groom, we hosted for the weekend the thirteen, young men (all in their early thirties) who served as groomsmen. These were brothers and cousins; and Fenn, CCHS, and Skidmore friends of Matt’s.  I’ve known all of them since they were little boys, middle schoolers, or teenagers. All of them have turned out remarkably well—good jobs, loved by wonderful partners, deeply loyal to friendships forged in classrooms and on playing fields, and at our home many a weekend over pizza after a game and or during sleepovers that were sometimes far too noisy and active for me as the sole female in the house. But I endured those noisy and sometimes challenging social situations to ensure that our sons had deep, lasting friendships that to me, at least, would turn out to be more important to them than any grades they earned in middle school, high school, and college.

I’ll be honest with you. Watching those fine, young men that weekend laughing and crying so easily with each other as they shared memories and feelings from their childhood and adolescence, as they mourned again the loss of one of them too young to have died, as they played a pick-up game of soccer in our back yard up until a half hour before the wedding (with the photographer asking might they get dressed soon so that he could have pictures of them getting ready as he had already done with the bride and her attendants an hour earlier—I told him I would not interrupt that game for the world), I felt blessed that I was among them. Yes, there had been during their adolescent years some bad grades, some turbulent emotional experiences, and, yes, even some encounters with police and some court appearances, to be perfectly honest—all of which had their parents’ heads and hearts in a whirl and a dither. But mostly there had been great joy and pride at watching them turn into good men, exploring their strengths and dealing with their faults and weaknesses. It’s all we can ask.

I am always astonished at how loyal and loving males who have built friendships over time through sports or a shared passion or experience are to each other. They are also extraordinarily loyal when you have been good to them—and it breaks my heart to see how utterly beholden they feel to the adults who cared for them when they were young, set them straight when they needed to be, believed in them when they did not believe in themselves, showed up for their games and their team whether they sat on the bench or played each period, fed them and housed them when they were teenagers and wanted to be together.

Imagine what it feels like to watch your youngest son get married to a lovely, young woman and spend the two days before that wedding in the company of young men you have known since their childhood and youth who landed on their feet as adults—not perfectly and not in a perfect chronological sequence—but well and happily and with good life partners.  And imagine what it felt like each time one of them would cross into the kitchen alone when I was there, unbeknownst to the others, throw his arms around me and say, “This is so great.  Matt and Courtney! I love you, Mrs. Ward.” I would not give up this memory, this crystallization of the imperfect (yet perfect) unfolding of the lives of our sons and their friends for a better secondary school or college acceptance or job one of my sons might have acquired instead. The gift of growing up imperfectly in the company of good friends through time is about as deep and abiding and transcendent as it gets. The gift of watching your son do that is unspeakably beautiful.

Let’s make a pact to let our Fenn boys be young and unencumbered for as long as we can, to promise them that no matter where they land academically, socially, artistically, or on the playing field, they are loved and cherished beyond words, that this is the time in their lives to love and enjoy themselves and their friends fully, to feel each day to be one worth living no matter what the challenges or disappointments, to burden them less with our own need for a certain kind of success for them.  They will not disappoint us in the long run, I can assure you. And what you get in return is more than you could ever hope for.

Posted by in Lorraine Ward on Friday October, 24, 2014
Tags:  For the Love of Fenn, Parenting, Secondary School Placement
Like
1