A Visit to New York City to see Fenn Alums 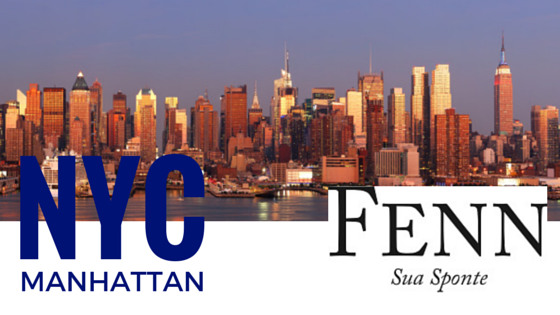 It is a Thursday in late April and I am aboard an Acela Express train bound for New York City and a Fenn alumni reception in midtown Manhattan. On my left there is a cup of coffee cooling and on my right is a list of the former-but-always-will-be Fenn boys scheduled to attend the event this evening, many of whom I taught or coached in their years on Monument Street.

Davis Rosborough, class of '02: My advisee in eighth grade. Always thoughtful and upbeat. Helped me coach and referee the intramural football games in seventh grade because he was injured. Became a good quarterback at Deerfield. Loved my nicknames and would help me come up with new ones for kids.

The Wolff brothers, Alex, class of '98, and Charlie, class of '03: Smart and tenacious about everything they did. As the Latin saying goes, Labor omnia vincit: Hard work conquers all. Alex had lots of energy and loved soccer, and Charlie was always in the middle of everything in a good way. Get this: Charlie appeared prominently in the cover photograph of the Phillips Exeter curriculum guide just a few months into his first year there. What are the chances?! Exeter has about 1,000 students.

Malin Adams, class of '06: As impressive as they come. I learned as much if not more from him than he did from me. Brilliant, humble, and a natural leader. I invited him back every year when he was at Phillips Andover to speak to the Fenn eighth grade parents about our ninth grade, a program for which Malin stayed at Fenn. He nailed that talk every year. One of those boys you always knew had special gifts and limitless potential.

Christian Manchester, class of '03: A student in my Honors eighth grade Latin class. I don't think he made a mistake on a test or quiz until December that year. He was a machine. Always ready with a smile and kind words.

Bobby Atkins, class of '01: Good athlete. Big, tough kid who played three helmet sports (a rarity); football, hockey, and lacrosse. After playing varsity hockey for a few years he switched to basketball in ninth grade at Fenn because he wanted a different experience. As the hockey coach, I found this hard. I had just lost one of my top returning defensemen and we just became a weaker team. But Fenn is a special place where boys feel comfortable trying new things and feel supported doing it. So, as an educator I thought it was great and I was happy for Bobby.

I am excited to see these guys and many more tonight, and to get the latest on their lives. There will be the usual lay-up questions to warm up: What do you do for work? Been there a while? How do you like the Big Apple? Will you come back to Beantown eventually? How are your mom and dad? Is there a significant other in your life? Kids now? Kids on the way?

Then we'll go deeper. What do you remember most about Fenn? What should never change about what we do there? If you knew then what you know now about going from boy to man, what would you do differently? The answers to these will be priceless, perhaps in terms of nostalgia for them but most certainly in terms of guidance for me as I help to educate current Fenn boys about what is important.

I'll also let the alums know that Fenn very much remains the vibrant place they attended, a small and caring school which seeks to educate boys for a lifetime of learning and leadership. The skin of the School may be different than they remember, with the addition of Ward Hall, Reynolds Fields, and the Jafari Library to name a few, but the bones remain very much the same. A lot of the teachers they loved are still there, we emphasize the same values, each boy still plays sports each season and Fessenden and Fay are still the big rivals, each boy explores the arts, Sua Sponte is the motto we live out each day, and our core values of honesty, empathy, respect, and courage mean a tremendous amount and we seek to cultivate them each day.

It will be honor to represent Fenn at this event, along with Jerry and Lorraine Ward, and Veronica Jorge Curtis and Harris Rosenheim from our advancement office. And it will be an honor to reconnect with these Fenn men now living and working in NYC, and to hear where their lives are leading and what gifts they took from their time at Fenn.