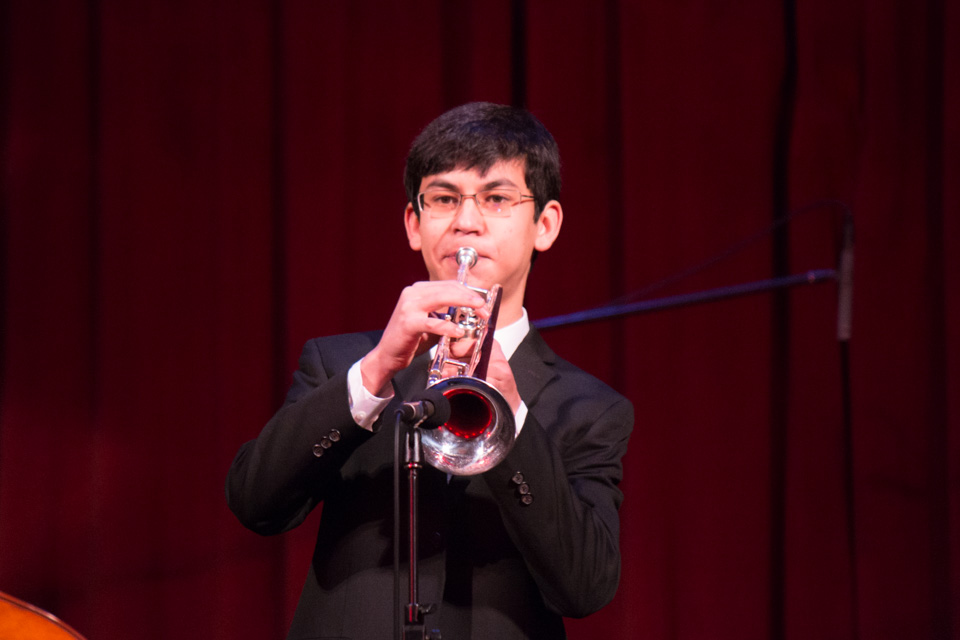 When Alex Tung, who graduated from Fenn last spring, was a fourth grader, he attended an “Instrument Petting Zoo” held each year by the music department to introduce new students to the array of instruments they might like to learn. He passed over the trombone and the drums and the clarinet and the tuba and headed immediately for the trumpet.

Alex knew that was the instrument for him; for one thing, he had heard recordings of famed trumpeter Wynton Marsalis, whose music proved that the instrument could produce much more than the harsh bleating sounds non-musicians might associate with the brass instrument. “I learned that a good player can modulate the tone and create something beautiful and lyrical, which is my goal,” Alex says.

In the six years that followed, Alex became “the most naturally talented music student I have encountered,” Maeve Lien, Fenn’s instrumental music director, has said. He was the Trumpet Section leader and Concert Band vice president, he volunteered coaching the trumpet section in the Beginning Band, and he was a founding member of the Fenn Brass Ensemble. Alex placed as lead trumpet for the Jazz Ensemble at the Eastern District Honor Festival in both 2014 and 2015 and he is currently playing with the Boston Youth Symphony Orchestra under the direction of Mark Miller.

Now a freshman at Lexington High School, Alex says that striking the right balance between his academic load, which includes honors classes, and his music ensembles can be a bit tough sometimes. He maintains an “A” average at school and particularly enjoys math, but he says that music is his “number one priority.”

Alex feels strongly that his experience at Fenn helped prepare him for the rigors of high school, both musically and academically. He auditioned for and was accepted into the high school’s Jazz Combo and its larger Jazz Ensemble, where he plays with mostly older students; in fact, he is the only freshman in either of the ensembles. The Combo writes and arranges its own music, allowing many improvisation opportunities, while the Jazz Ensemble focuses on big band arrangements. He was also accepted into the Wind Ensemble, LHS’s most advanced band, which is led by Performing Arts Coordinator Jeff Leonard.  Alex feels lucky to be part of one of the most highly-regarded music programs in the country.

This winter he auditioned for the All-State Concert Band and was selected as first chair trumpet for the ensemble. The week-long March event will include a performance at Symphony Hall.  This summer he will attend the Berklee Five Week Program, for which he won a half scholarship at the Berklee Jazz Festival with the first place Lexington High School Jazz Combo. He also plans to audition for the 2016 National Honor Band this spring.

In February, Alex performed with the LHS Jazz Combo at the Charles Mingus Festival held at the Manhattan School of Music in New York City. The Combo placed first in the competition, which included ensembles from across North America. The Jazz Ensemble was selected through a rigorous audition process to perform before celebrated jazz trumpeter Wynton Marsalis at the Essentially Ellington Festival in New York City in May, to be held at Rose Hall, the home of jazz at Lincoln Center.

Alex enjoys returning to Fenn during school breaks to help out with the band program. He also teaches privately on a volunteer basis. “I think that teaching one-on-one has in turn made me a better student,” he says.  “What sets Alex apart is not only his natural ability, but also his work ethic and humbleness,” says Maeve. “He is that rare music student who is not only diligent and incredibly talented, but also kind and gentle.”