<Back to News
Boys Ready Apartments for Homeless Families 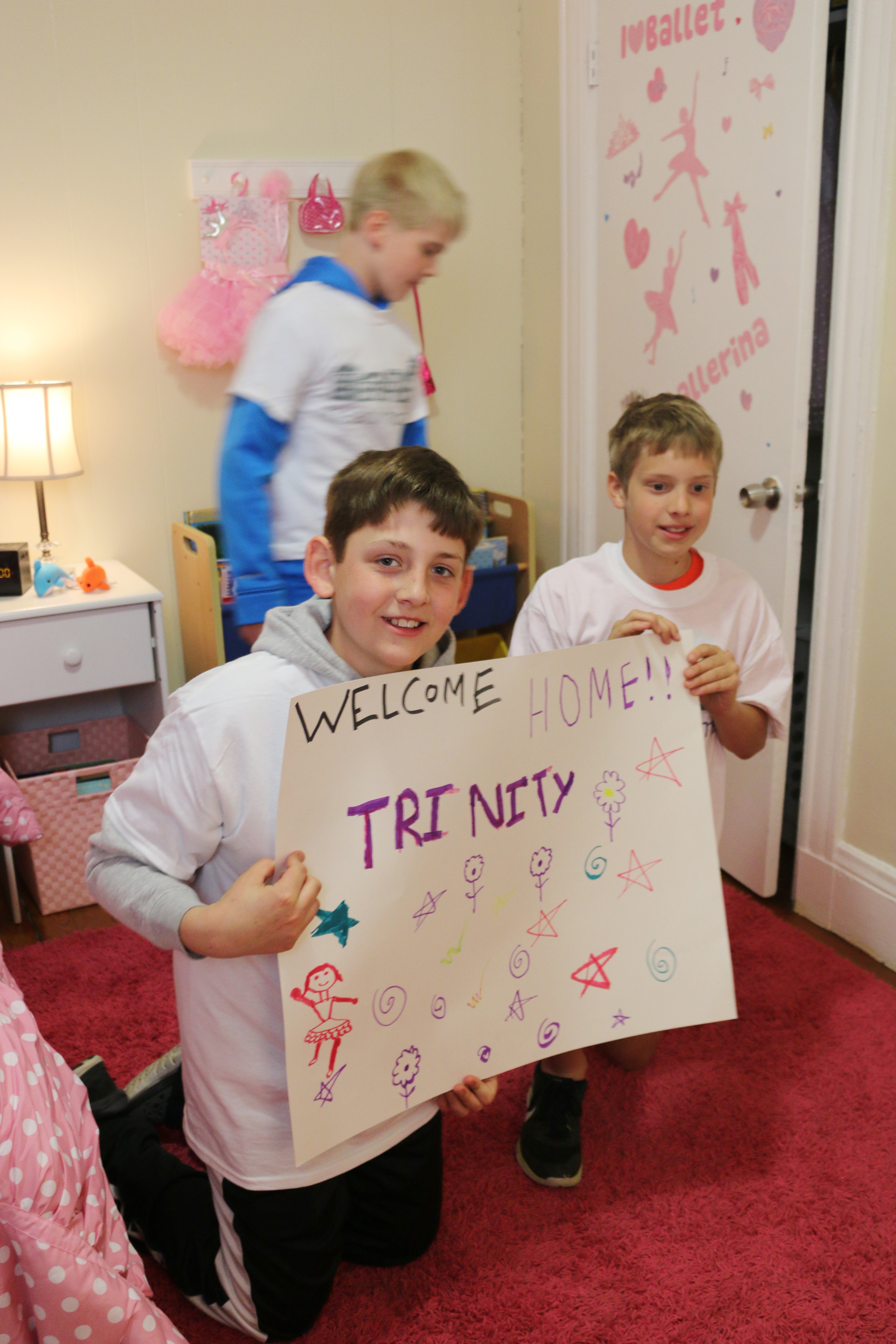 “Every day when I come home from school I need to remember how lucky I am,” said Adam Ewing, a Fenn sixth grader.

“I know I can’t take anything I have for granted,” chimed in Adam’s brother, James, an eighth grader.

Adam and James were talking about what they and some forty other Fenn boys and Fenn parents did on Sunday, April 24, which was to change the lives of a single mom of two young children and of a woman who had lost her husband and son. All had formerly been homeless and Fenn volunteers were preparing apartments for them—one in Dorchester and one in Quincy.

The Ewings and their children are driving forces behind Fenn’s involvement with the Up and Out initiative, the signature volunteer program of Heading Home, a non-profit organization that provides emergency, transitional, and permanent housing and support services to low-income homeless and formerly homeless families and individuals in Boston, Cambridge, Somerville, Medford, Malden, Everett, Quincy, Chelsea, and Revere.

The Ewings, parents and children, have been involved with Heading Home for about eight years. Ryan Ewing '14 was the first to help with a move, and he proposed the idea at Fenn when he was a fifth grader. Since, Fenn volunteers have helped with several moves. Ryan, the oldest Ewing child, and his brother, Kevin '16, participate in moves through their current school, Middlesex.

An Up and Out move is astonishing and inspiring: volunteers show up with cleaning supplies, tools, furnishings, linens, toys, and food, and they spring into action. In a few hours they transform an empty apartment into a warm and appealing home, personalizing it to the new occupants’ tastes and adding special touches like a welcome mat and wall stickers that celebrate family and home.

“I couldn’t believe we did it all,” declared fourth grader Max Libby-Grantham, who worked at the Quincy Up and Out with his mom, PJ. “I was amazed!”

On Sunday in Dorchester, two dozen boys (and one girl, Katherine Ewing), most of them in Heading Home t-shirts, and a group of parents trotted up to and down from the third floor apartment as they unloaded a U-Haul truck parked at the end of the block. They carted donated chairs, tables, bureaus, lamps, toys, boxes of food staples, and endless other items, managing to lift, tug, and pull unwieldy box mattresses and sofas up three narrow flights of stairs, maneuvering them around seemingly impossible turns. In the apartment they washed windows and floors; wiped out bureau drawers; assembled tables, lamps, and a small barbeque grill for the deck; sorted books and toys; and bounced on the beds, anticipating the joy of the children when they saw their new rooms and enjoying working alongside their friends. Michelle Heaton, Fenn’s Service Learning director, went from room to room, helping to supervise the process.

The young volunteers lovingly decorated the three-year-old girl’s room in pink, applying ballet-themed stickers to the walls and setting up a dollhouse, and a room for her seven-year-old brother, who loves the Chicago bulls; they affixed a netted hoop to his closet door and someone tossed in a stuffed toy lion holding a small basketball. Some boys claimed particular projects for themselves, showing great pride of accomplishment when they were finished; eighth grader John Stewart, for example, filled a bookcase with toys, games, Legos, and books, making sure everything was arranged just so, to appeal to a little boy’s imagination.

It was controlled chaos, with everyone having a job to do—one parent worked tirelessly under a bathroom sink trying to repair a leak; others washed plates and glasses; two boys assembled a vacuum cleaner, and several created “welcome home” posters for when the family arrived. They paused only to wolf down a donut munchkin (or two) and to check out what their peers were working on.

At noon, everyone gathered in the various rooms, their excitement palpable; some of the boys held “welcome” signs and others peered out the front windows so they could announce the family’s arrival. Finally, in came Chanel and her two children, Trinity and Treon, and their wide-eyed expressions of shock, joy, and gratitude moved many to tears.

“Just seeing their reaction was so exciting,” declared sixth grader Nicholas Allegretto. “They were so happy.”