<Back to News
Andrew Metellus: "Helping People is my Priority" 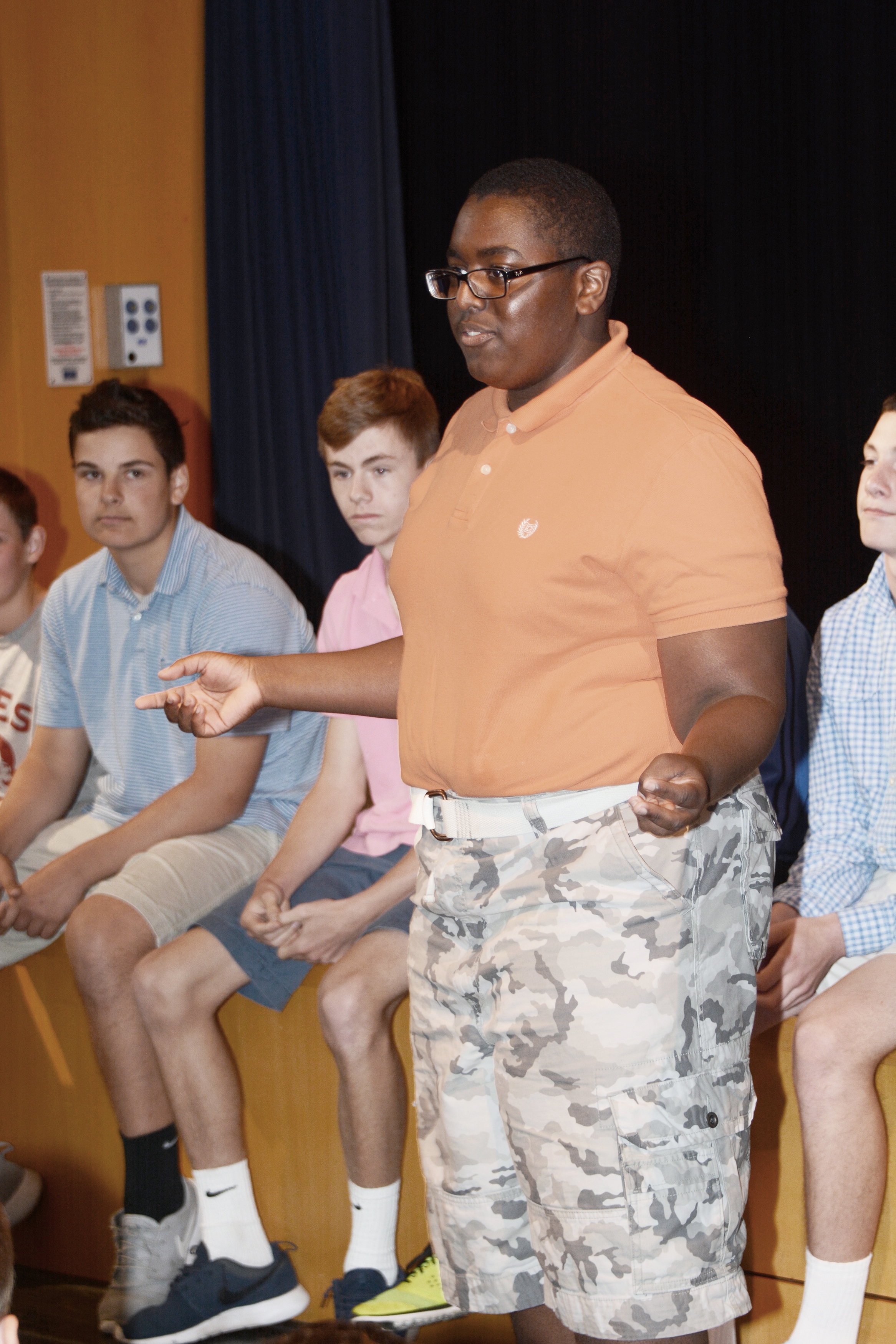 If School President Andrew Metellus could leave a legacy to Fenn, it would be, he said, “that I was nice to everyone.” For his Senior Reflection Andrew chose to speak about friendship, and his actions were just as loud as his words. He called up every one of his ninth grade classmates and performed an elaborate handshake that the two had rehearsed, and then had all of them sit on the edge of the stage while he spoke.

“I wanted to show the kind of chemistry we have,” said Andrew of his twenty-four “brothers.” He asked the crowd in the hall to reflect on the importance of having, and being, a friend.

In an interview after his reflection, Andrew said that over his six years at Fenn he wasn’t always outgoing. When he arrived, having come from a school in Waltham, he “knew no one” and had to make friends. As time passed, he realized that he had much in common with many boys, including favorite games and TV shows. Andrew became a Peer Advocate in fifth grade and joined the Diversity Committee in sixth, and he values both experiences for helping to build his confidence and providing him with opportunities for sharing his opinions and helping others.

“I’m grateful to know I have a voice and that I can represent the voices of other people,” Andrew said. He confided that it is a heady experience to “see the faces of fourth graders looking up at me each Friday when I run All School Meeting, as if I am an authority figure. It is crazy!” Andrew likes the idea of being “a bridge” between students and administration, though he quickly learned what all leaders do, he said—that representing a constituency can be challenging.

When he and his vice president, Colin Cunningham, “had a good idea and couldn’t make it happen because there wasn’t enough time or money to do it, or we couldn’t get approval, we’d have to listen to cries of ‘You promised!’ from students,” he said.  But he is proud of what they did accomplish, including providing the Panini maker for which older students had clamored, and more important, for the tone they set—one of good humor and comraderie. Andrew said his Fenn experience might lead to other leadership possibilities as he moves on to high school at Arlington Catholic.

“Helping other people is the priority in my life,” Andrew declared. “Everyone has a choice: to be unsupportive of others or to be nice. I go down the path of niceness.” He is known for the way he supports his fellow ninth graders when they offer their Senior Reflections—he even stayed nearby, sitting on the stage behind a particularly nervous classmate.

“It’s funny to think of myself back when I arrived at Fenn,” Andrew said. “How awkward I was at first. I was so quiet; I barely talked. Every Friday when I get up and stand in front of the hall, I think, ‘Here I am—a guy you would never expect to be doing this.’ It’s a good feeling.” Speaking in front of a crowd has gotten easier, he said, in part because he always tells himself, “What’s the worst that can happen?” And when “the worst” does, such as when he occasionally forgets the closing reflection he had planned, he laughs, ever good-natured, as he searches mentally for the answer.

Andrew played football, basketball, and baseball at Fenn, and served as a Big Brother to a Lower School boy; they enjoyed playing basketball, gym soccer, or board games. Science is one of Andrew’s favorite subjects as he feels that it will help him the most as he continues his education. In his free time he likes to relax with his family, which includes his younger brother, McCliff, who is a Fenn sixth grader, and his older sister, Jenny. They watch TV (he’s keen on animated shows) and enjoy going to the beach in the summer.

Andrew can hardly believe his last of six years at school is coming to a close. What will he miss most about being a Fenn boy? “I’ll miss the people who brought me to where I am today,” he declared.