<Back to News
Eighth Graders Investigate the Food System 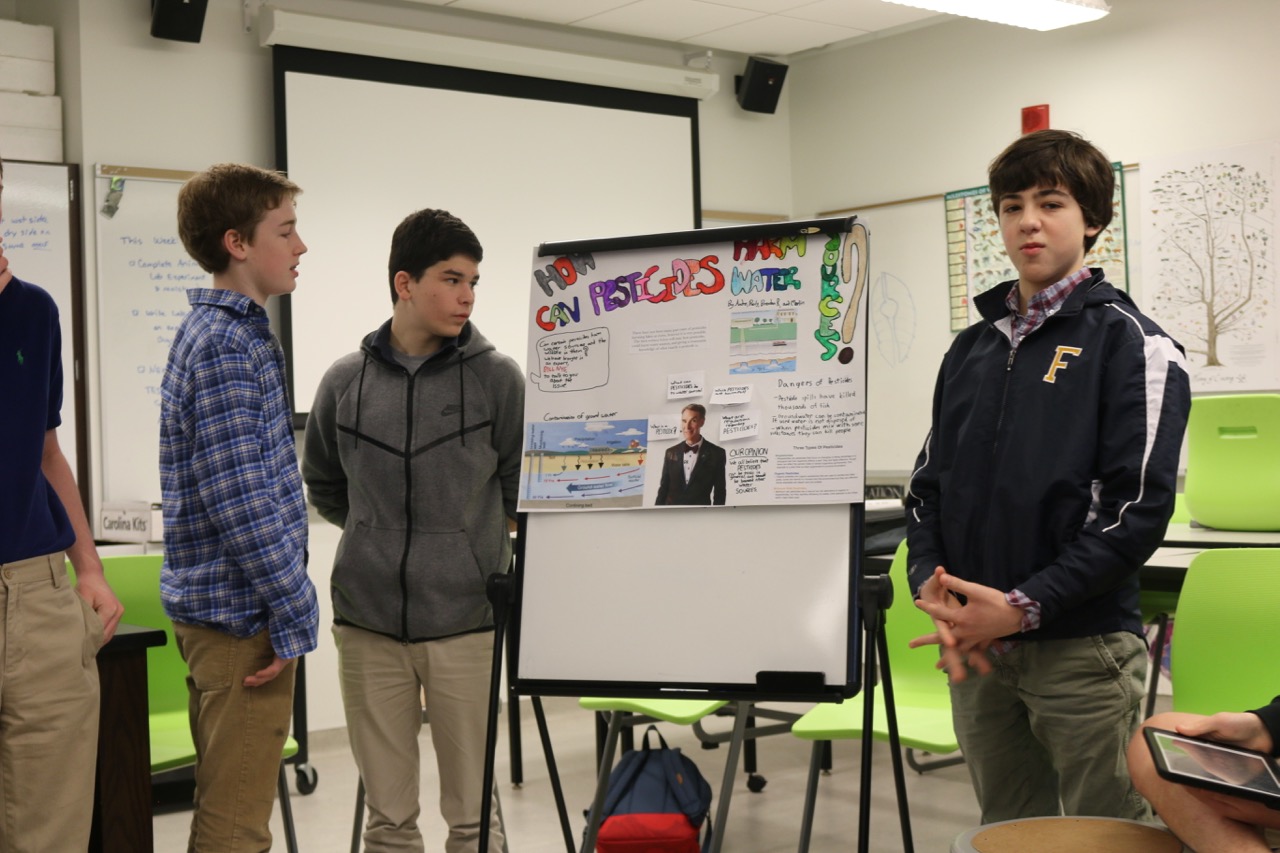 In the most basic of Sua Sponte moments, 8th grade science teacher Derek Cribb asked his students to take their new knowledge of nutrition and research a topic related to the food system. The project featured a number of elements that were entirely up to the boys. What hypothesis did they have about the food system? What kinds of research would they do to gather data? How would they formulate conclusions? And what would be the most compelling way to present their findings? As the groups aptly noted before their presentations began, "even though this was a research project, we were given a science experiment, to some extent, and had to create the entire lab in order to arrive at our answers."

Because of the enormity of the food supply in our country and the daily impact it has on our lives, the questions that the students posed were diverse and, as one can imagine, fascinating to see play out during the final presentations. One group wanted to know about the fishing industry—what would happen if a popular species of fish was depleted through overfishing? How do certain kinds of fish become more desired than others? What can one do to help the declining fish stocks?

Another group was curious about muffins—specifically, whether a Dunkin Donuts muffin takes more energy to produce than a Verrill Farm muffin and how the nutritional components of the chain-restaurant muffin differ from those of the organic option.

A third group had questions about local farms. Do Fenn parents know about the huge number of farms that are close to school? Are these farms a better option than large chain grocery stores? This group theorized that the large chain grocery stores utilize more energy and therefore have a greater impact on our environment and resources. They wondered if Fenn families knew that they could shop locally and, by doing so, help limit environmental depletion.

Finally, one last group pondered what kind of energy it takes for a local Concord restaurant to make three popular foods that we eat: apple pie, french fries, and milkshakes. They investigated the fuel consumption required to get those ingredients to our area and examined the impact it would have on the environment.

In the end, all of the boys were surprised by the significant impact our small choices have on the larger community, country, and world that we inhabit, even when it comes to something as simple as choosing a muffin. One student, who researched apple pies, had no idea that the cinnamon needed for the recipe must be imported from overseas. Another group found that a third of the waste in our country contains uneaten fast food; moreover, the packaging for fast food makes up 33% of the trash we generate.

When asked about what surprised them most about their work, one boy noted, "I had no idea that people make choices about the fish they eat soley on looks. It would be a much more sustainable mindset if people could do a little research first and instead make choices based on fish population." And another 8th grader noted, "I really wanted to make the argument that the Fenn donut sales should come from Verrill Farm so that we support a system that uses less fuel to make their products. I guess I was surprised that that isn't the case right now."

Ultimately, these 8th grade students along with the ones in Ms. Heaton's 8th grade science class are wrestling with the same real-world issues that most adults face. Is it a better option for both my family and the environment to shop locally and support local farms, even if the cost is more? Can I find ways to save energy by buying less food and therefore producing less waste? Are there small choices that I can make for my family that will slowly change the way we consume food in this country? 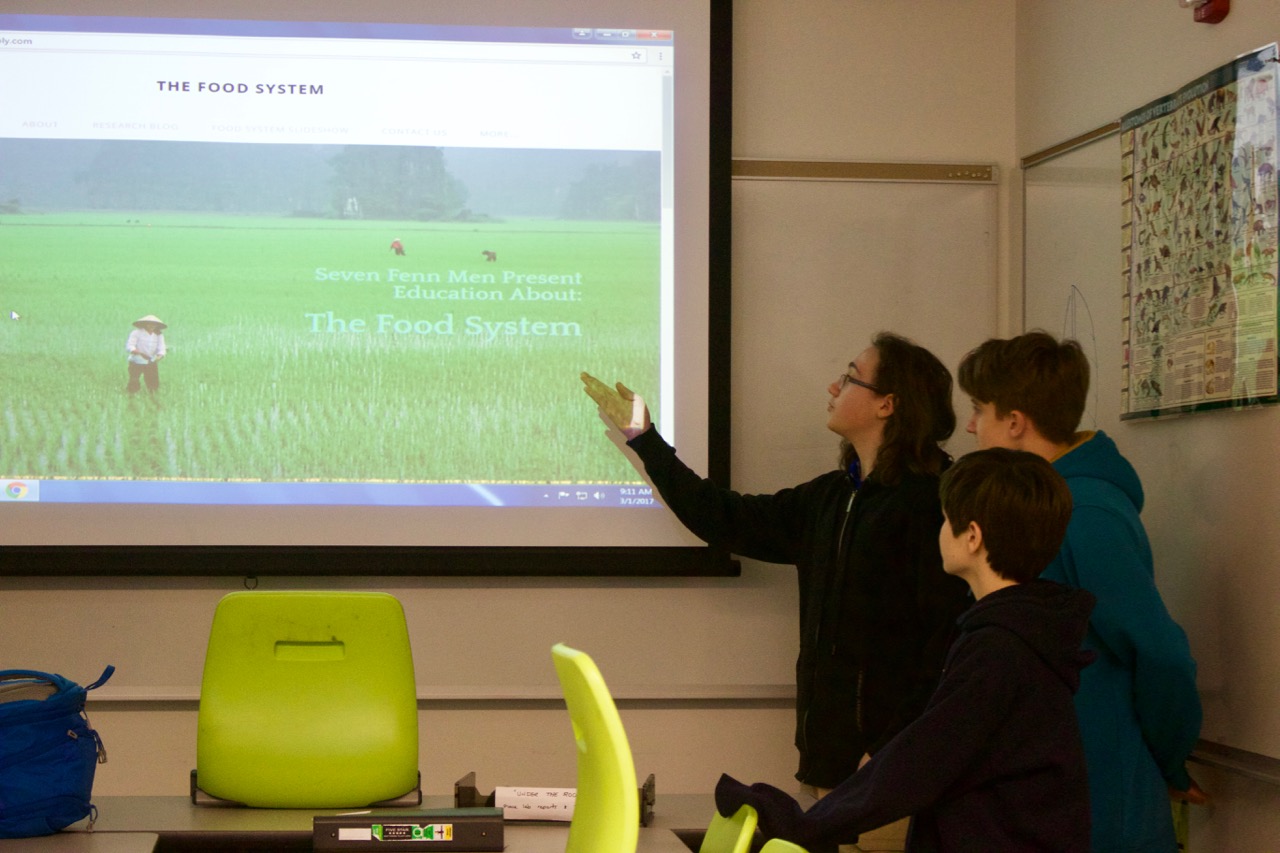 Like most of the answers that adults arrive at, the solution is never easy. For the time being, however, these students learned the importance of investigation and not taking information at face-value. And most importantly, they formulated conclusions and arrived at next steps that informed not only their classmates, but also others who came to see the presentations.

Two of the groups would like to share their finished projects with the rest of our community. Please find their work below.

A Map of Local Concord Farms for Fenn Parents

A Website to Educate Yourself About the Food System