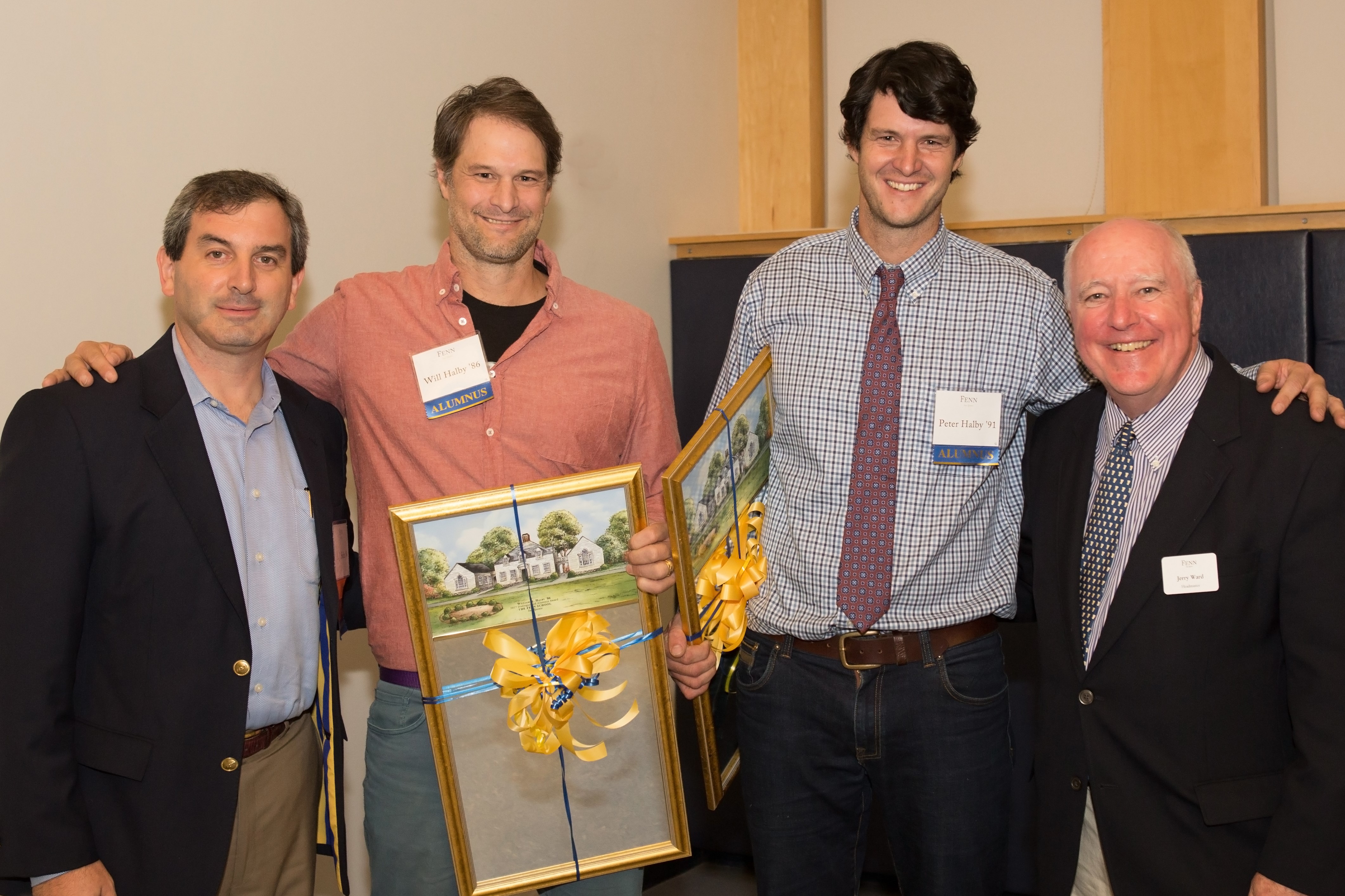 The Fenn School has awarded brothers Will Halby ’86 and Peter Halby ’91 2017 Distinguished Alumnus Awards. The prestigious award is given to alumni who have made outstanding contributions to their field and to those around them. Headmaster Jerry Ward and Alumni Council President A.J. Sohn ‘84 bestowed this honor upon Will and Peter at Fenn's annual Alumni Dinner on September 22.

The Halby brothers received the award in recognition of their founding of Zeno Mountain Farm, a non-profit organization that runs a series of arts- and sports-based camps that seamlessly bring together people with a wide range of disabilities (Down’s syndrome, autism, traumatic brain injuries, etc.) and abilities. The camps aim to break down barriers between the disabled and abled and challenge perceptions that these groups of people are separate or different from each other. This diverse Zeno community bands together to tackle projects that include live drama, film, musical theatre, athletic events and even a rolling pageant that has become a part of Bristol, Vermont’s Fourth of July parade.

Zeno Mountain Farm was established in 2008 when Will, Peter and wives Vanessa and Ila acquired 20 acres of property in Lincoln, VT and merged other geographically-distant specialty camps that they had been running since the early 2000s. The brothers’ mutual experience working in camps and other programs for children and adults with disabilities since their teen years inspired the purchase and their valuable work. The now three-hundred-acre Zeno Mountain Farm location in Lincoln serves as the organization’s main facility, while Zeno also operates annual programs in Los Angeles and Florida and hosts movie premieres in New York, D.C., Boston, San Francisco, Los Angeles, Seattle and other nationwide locations.

No one - including directors and administrators - is paid or pays to be a part of Zeno, and campers and counselors are invited back for as long as they wish to attend. Together, everyone supports the Zeno community at the highest level of their individual ability.

The inspiring contributions of the Halby brothers were also recognized in a Fenn All School Meeting earlier on the day that they received their Distinguished Alumnus Awards. Headmaster Jerry Ward warmly welcomed the brothers to the meeting to share highlights from their Fenn years and perspective on the influence of the school community on them and their business endeavors.

Will and Peter each fondly remembered their Fenn years.

“My fondest memories are of the community, my friends, and my relationships with my teachers,” shared Peter. “For me, it was the first time that adults were so respectful, honest and nurturing.”

Will’s memories were a balance of sports and academics. “I remember feeling so puffed up and great when I knew that Mr. Starensier - Fenn’s Athletic Director - believed in me as a soccer player (and I wasn’t the best player). Probably most important though was the studying and preparation for our next school adventure.”

Will added, “You don’t know what will have the biggest influence on you [during your Fenn years], but it’s happening right now. It will be a lot of fun to look back and connect the dots [later in your lives].”

And, as the Halby brothers look back to connect their dots, they see the seeds of inspiration that Fenn helped to plant during their years as young students.

“You are part of something that is wonderful and bigger than yourself here at Fenn,” shared Peter.

Will and Peter went on to Belmont Hill School and the University of Vermont after their Fenn years and originally hailed from Concord, MA.