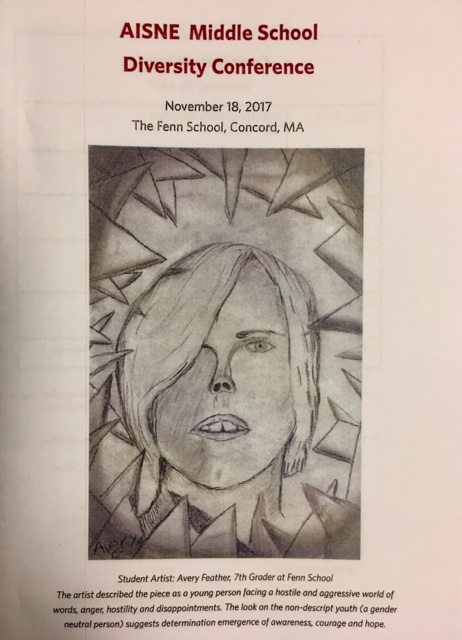 On Saturday, November 18, more than 300 middle school students from 22 independent schools across New England descended on the Fenn campus for an inspiring AISNE middle school diversity conference on “Making Your Voice Heard in the Noise.” Artwork by Fenn 7th grader Avery Feather - depicting a young person facing a hostile and aggressive world with determination, courage and hope - set the tone for the conference and adorned the conference guide.

“It was my hope that this conference would generate the platform and opportunity for young students to exercise their voices and be heard in a place of safety,” shared Fenn’s Director of Diversity Tete Cobblah. “I was surprised and pleased by the passion, honesty and eloquence of the students who attended as they celebrated this opportunity and the rich conversations of the day. And to see such robust participation from our Fenn community truly brought to life for attendees our school’s commitment to diversity and multicultural education and learning.”

Head of School Jerry Ward was in attendance to welcome conference participants to Fenn. Noah Lippa, president of Fenn’s Student Diversity Committee, joined Mr. Ward in this welcome by declaring the conference open and delivering a powerful speech that looked to Fenn’s values of honesty, respect, empathy and courage as inspiration in challenging young people to take responsibility for their future. Fenn student body vice president and 9th grader Nathan Edwards-Roseney also shared a poem to begin the conference.

“It was cool to be at Fenn for my last year [attending this conference],” shared Edwards-Roseney. “When the moment came for me to deliver my poem on stage, I felt good being in Ward Hall and seeing how many students had come to Fenn for the day. It also meant a lot to me to see so many Fenn faculty and fellow students come together on our campus on a Saturday.”

Author Bich Minh-Nguyen delivered the conference’s keynote address on the themes of immigration, food, and family that are central to her writing. Nguyen penned the memoir, Stealing Buddha’s Dinner, which received the PEN/Jerard Award and was named a best book of the year in 2007 by The Chicago Tribune. Nguyen also published two other novels and co-edited three anthologies, and her work has appeared in the New York Times, the Found anthology, and the Huffington Post. Additionally, she has appeared on programs including PBS NewsHour and NPR’s All Things Considered.

Nearly twenty workshops followed Minh-Nguyen’s address. Fenn faculty led nine of the workshops on topics ranging from the harm of stereotypes to the power of silent messages and our identities to how to make campuses more accessible for all.

“The workshop on ‘Our Common DNA’ was one of my favorites,” shared Fenn 6th grader Max Libby. “I learned that 99.9% of people’s DNA is similar, and we, therefore, really aren’t that different. A lot of people get shamed for diversity, but there is a way to find similarities with anyone.” 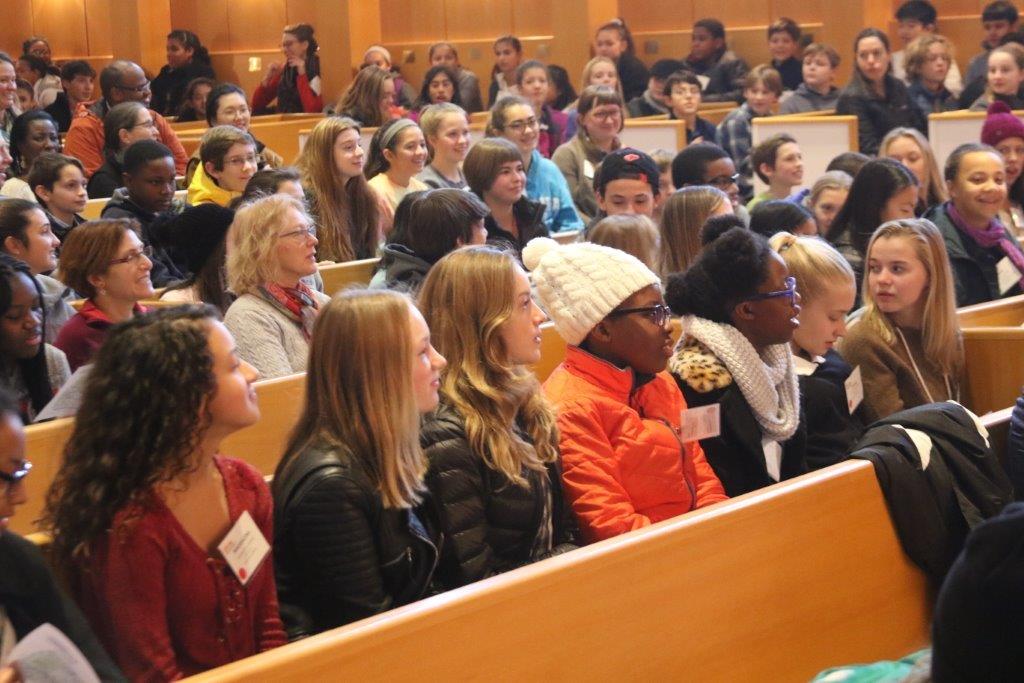 “I was very impressed by the way this group of Fenn boys led a discussion on diversity without any teacher involvement,” shared Diane Taubner, president of Fenn’s Parents Association and mother to a Fenn 7th grader. “They asked questions, made sure that people weren’t interrupted when they were speaking, and kept the conversation focused. I was truly proud to be a parent at a school that hosted and put so much time and effort into such an important gathering.”

The conference day concluded with a Pike School drama group sharing a short scene on “The N Word” that motivated a thought-provoking, student-led conversation about race.

“I was struck by what I was witnessing – a conversation about race opening up into echoes of concerned, honest, civil-minded and promising voices,” added Cobblah. “Our own Ward Hall was filled with students’ hopes, dreams and thoughtful observations about life and the future. It was a blessing for me as an educator and grandfather to hear such words of wisdom and humanity from middle schoolers. They raised their voices proudly and held all of us and all of our schools accountable for a better future.”