At the Alumni Dinner that kicked off the fifth annual Homecoming weekend at Fenn on Friday, September 21, Maryland-based Bill Lawrence ’78 received Fenn’s prestigious Distinguished Alumnus Award. Originating in 1991, the award is given annually to an alumnus who has made outstanding contributions to his field and to those around him.

Alumni Association President A.J. Sohn ’84 bestowed the award upon Bill following opening remarks from headmaster Derek Boonisar. Bill was recognized for his more than three decades implementing programs and researching and analyzing issues related to the Middle East and North Africa region and the wider Muslim world. He currently serves on the faculty at George Washington University’s Elliott School for International Affairs and has taught or lectured at more than 100 universities, authored three books, and co-created six documentaries and 14 albums of North African music.

The accolades that Bill has been given for this body of work are equally impressive. He has received six merit awards from the U.S. Department of State, two medals from the Egyptian government, and an alumni achievement award from his undergraduate alma mater, Duke University. Beyond Duke, Bill acquired a Ph.D. and Master of Arts in Law and Diplomacy from The Fletcher School at Tufts University, as well as Advanced Study Certificates from the University of Paris (Sorbonne) and American University in Cairo.

Earlier in the day on September 21, Bill was honored during an all-school assembly in Ward Hall. Before this gathering of hundreds of students, faculty, staff, and guests, Bill shared a compelling snapshot of his most profound Fenn memories and the challenges and successes he has encountered and enjoyed across his astounding career. Eighth and ninth grade classes were also treated to smaller group conversations with Bill to dive even more deeply into his life and Fenn experiences and his points-of-view on the complex, current-day political climate.

Bill challenged Fenn students to “learn about, empathize with, and build connections with others who are different from you,” and, even more specifically, to “learn more about the Muslim world and be kinder to this group of people.” He pointed to the learning of languages as key to building bridges. “Learn languages, guys,” he proclaimed from the podium as earnest Fenn boys soaked up his message. “Languages are not only a skill, but also a window into other cultures.”

Proof that this important message was taken to heart came in the form of an Upper School student who approached Bill after All School Meeting to speak to him only in French. “Former Fenn French teacher Madame Eades and her conjugates were clearly there in spirit,” he added when reflecting on the special moment.

As Bill reminisced about the impact and value of his Fenn days, he remembered the “community and its sense of values, and the fact that you could do anything if you put your mind to it, but it was your responsibility.” Bill also credited Fenn with “building character and confidence” and developing speaking skills that now allow him “to go fearless” into the speeches, congressional testimony, and international news interviews he frequently gives. 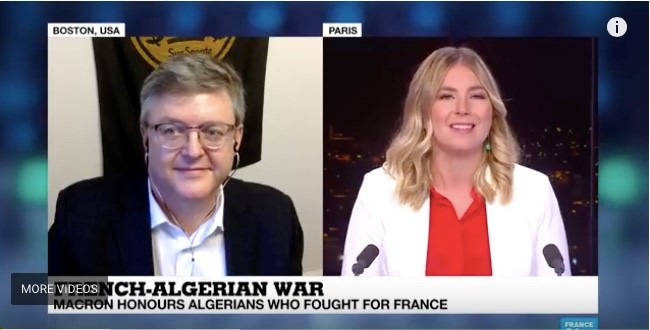 Ironically, Fenn’s Alumni and Development Office served as a temporary news studio during Bill’s visit to Fenn that day as he participated in a remote interview with France 24, a round-the-clock international news and current affairs television network based in Paris and broadcasting to tens of millions of viewers worldwide in French, English, Arabic, and Spanish. With a Fenn banner hanging behind him and the motto of Sua Sponte clearly visible, Bill delivered his expert point-of-view on French President Macron’s recognition of the contributions to the French nation of the Harkis, Algerian soldiers and citizens who collaborated with the French colonists, and recent acknowledgement of their torture during the Algerian war of liberation some 70 years ago. Click here to view Bill’s full interview.

As he reflected days later on the Homecoming festivities and the award he had received, Bill shared with Derek Boonisar and Alumni Giving & Engagement Officer, David Mountcastle, his appreciation and hopes for Fenn’s future. “I feel like this entire experience was a moving tribute to Roger Fenn, his vision and what it wrought, which includes all of the important things you all are doing to prepare the next generation for new challenges.”

A hearty congratulations and thank you to Bill for his award and recent visit to his beloved alma mater! The Fenn community is delighted to count you among its own.