Viewing of the rousing music video for “Glory” by rapper and actor Common kicked off the assembly. After Common called on “the wisdom of the elders and young people’s energy” to bring about change as part of the video, faculty and staff fittingly joined with upwards of 50 students across all grades to deliver an inspiring celebration that answered this call. 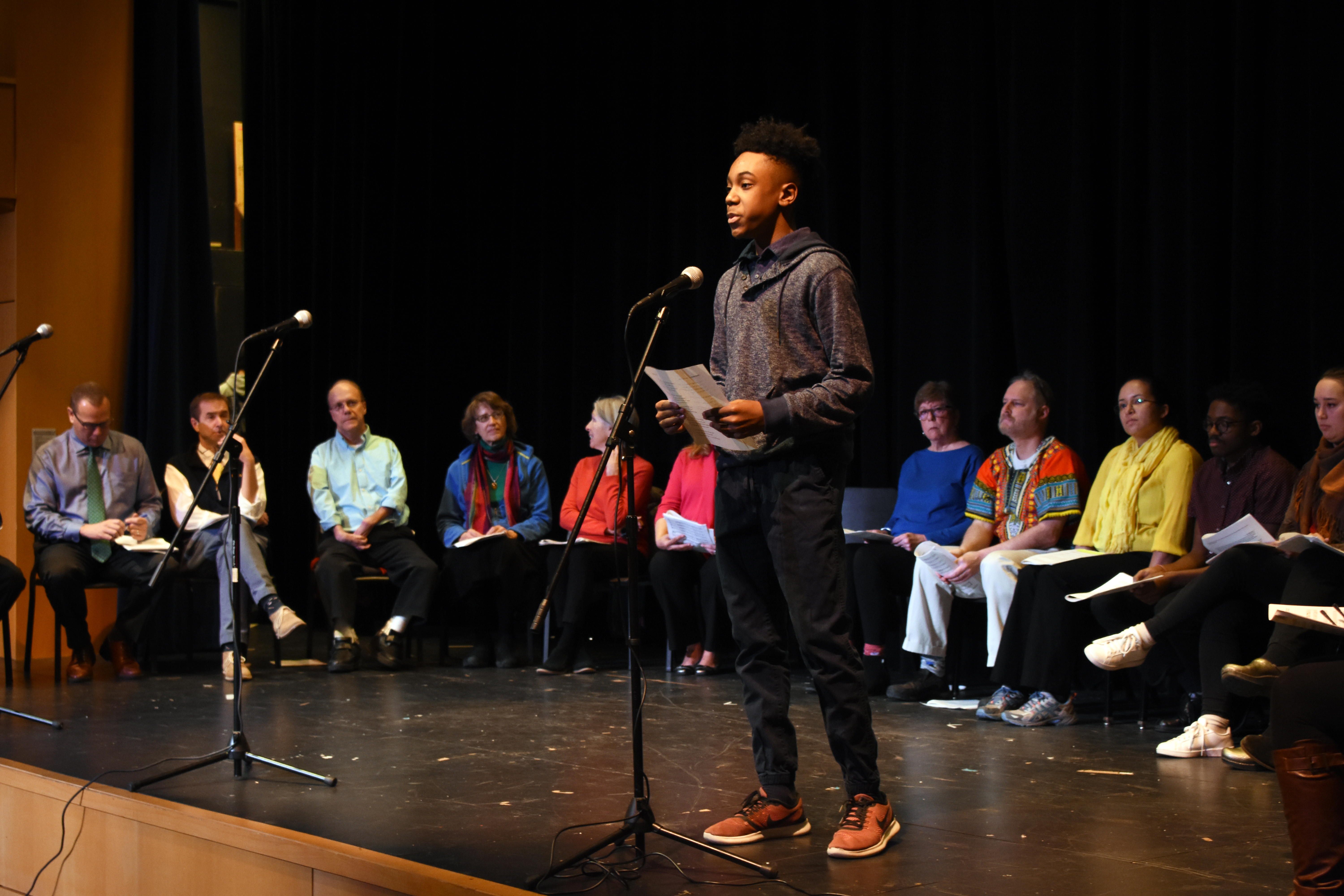 Ninth grader AliJah Clark took to the stage first to set the tone for the assembly, asking the audience of hundreds to “recognize the efforts” of those who participated in the fight for civil rights and to “reflect on our Fenn values and how we can use them to stand up for others in a positive way.”

Recitations of influential and passionate poetry and speeches from African-American activists and others followed to mark the occasion, as did powerful music delivered by Fenn’s Treble Chorus and the faculty and staff singing group dubbed “The Fenn MLK Stars.” The Treble Chorus offered the songs “River in Judea” and “Didn’t My Lord Deliver Daniel,” two songs speaking of hope, perseverance, and the desire for freedom. The Fenn MLK Stars brought their own talents and zeal to the stage with performances of popular spiritual hymn “Wade in the Water” and “Talking about a Revolution” by well-known musician Tracy Chapman.

The assembly also offered a platform for students, faculty, and staff to stand before the audience and share their personal stories, beliefs, and perspectives. One week before the assembly, the Diversity Office team asked the community to reflect on a series of questions and submit answers that could be chosen to be read aloud during the gathering. Questions ranged from “What does injustice look like to you?” to “When have you been overwhelmed with compassion or empathy?” The sharing of personal answers to these and other questions by a diverse group of students, faculty, and staff created a most meaningful and powerful moment in the celebration for all attendees.

“Fenn really empowers us to think more about diversity and to act,” shared Seiji Ma, a sixth grader who had passionately read “Proud to be Maladjusted,” a speech from Martin Luther King, Jr. that called on the audience to never be satisfied with injustice in our communities.

Fru Nkimbeng and AliJah Clark, both ninth graders who have been a part of Fenn’s MLK celebration since sixth grade, were eager to inspire the younger classes of Fenn boys with their active participation in the program. “I needed to be a part [of the assembly] to show the younger kids how important diversity is,” Nkimbeng shared. “I hope my participation will want to make the younger kids do this next year.”

“What I enjoyed most [about the assembly] was watching the younger kids [participate],” Clark added. “They're the next generation of the diversity committee.”

The assembly concluded with a group sing-along of Bob Marley’s “One Love,” offering a call to band together to make change.

“The blend of music and speeches by others, which were reflective of the time and ideals of MLK, all made for an incredibly rich program,” remarked headmaster Derek Boonisar. “This was a very galvanizing experience for us as a community, and the level of student involvement was a wonderfully positive development. It’s certainly been a theme of our approach this year.”

Wei noted that increased student involvement “was the number one thing that Middle School and Upper School diversity committee members requested (when sharing their desires for this year’s assembly),” and she was pleased that the assembly successfully delivered on that.

“We empowered students from the diversity committees to step up and lead much of the assembly,” added Manyuru. “It was wonderful seeing them rise to the occasion, especially for such an important and well-attended event within our community.”

Fenn’s Diversity Office team hopes to expand the MLK celebration from one day to upwards of one week in coming years, to allow for even deeper discussion of a greater number of critical issues.

Leading up to the assembly, students from the Middle School and Upper School diversity committees offered presentations in All School Meetings on issues of socioeconomic disparity and access and ability as a precursor to the assembly.