<Back to News
The Fenn School Opens for 91st Year

After a warm and invigorating summer, Fenn’s halls once more echo with animated conversation, bouncing basketballs, and running feet!

Eighty-four new boys from 22 area towns began their Fenn careers on Wednesday, September 4, at a New Student Orientation that officially welcomed them, re-introduced them to Fenn’s campus, and connected them with their faculty advisors and school peers. A lemonade social for boys and their families concluded the first step in a new chapter for these students.

Thursday was a jam-packed official start to the 2019-2020 school year! On a beautiful late summer day, excited energy and nervous jitters were palpable on Fenn’s campus. Newly-minted ninth graders arrived on campus early to help Headmaster Derek Boonisar and division heads welcome everyone and direct them to their advisor classrooms. As music wafted through the air and across the green (thanks to our talented Director of Instrumental Music, Virginia Morales, and Assistant Admissions Director, Allegra Maletz), boys hopped out of cars, vans, and buses, exchanging high-fives and stories with friends they hadn’t seen since June or sharing friendly smiles with new boys whose acquaintance they were making for the first time. One of the memorable sights of that morning was seeing towering ninth graders guiding far smaller fourth and fifth graders across Fenn’s green towards Thompson Hall, home of the Lower School. 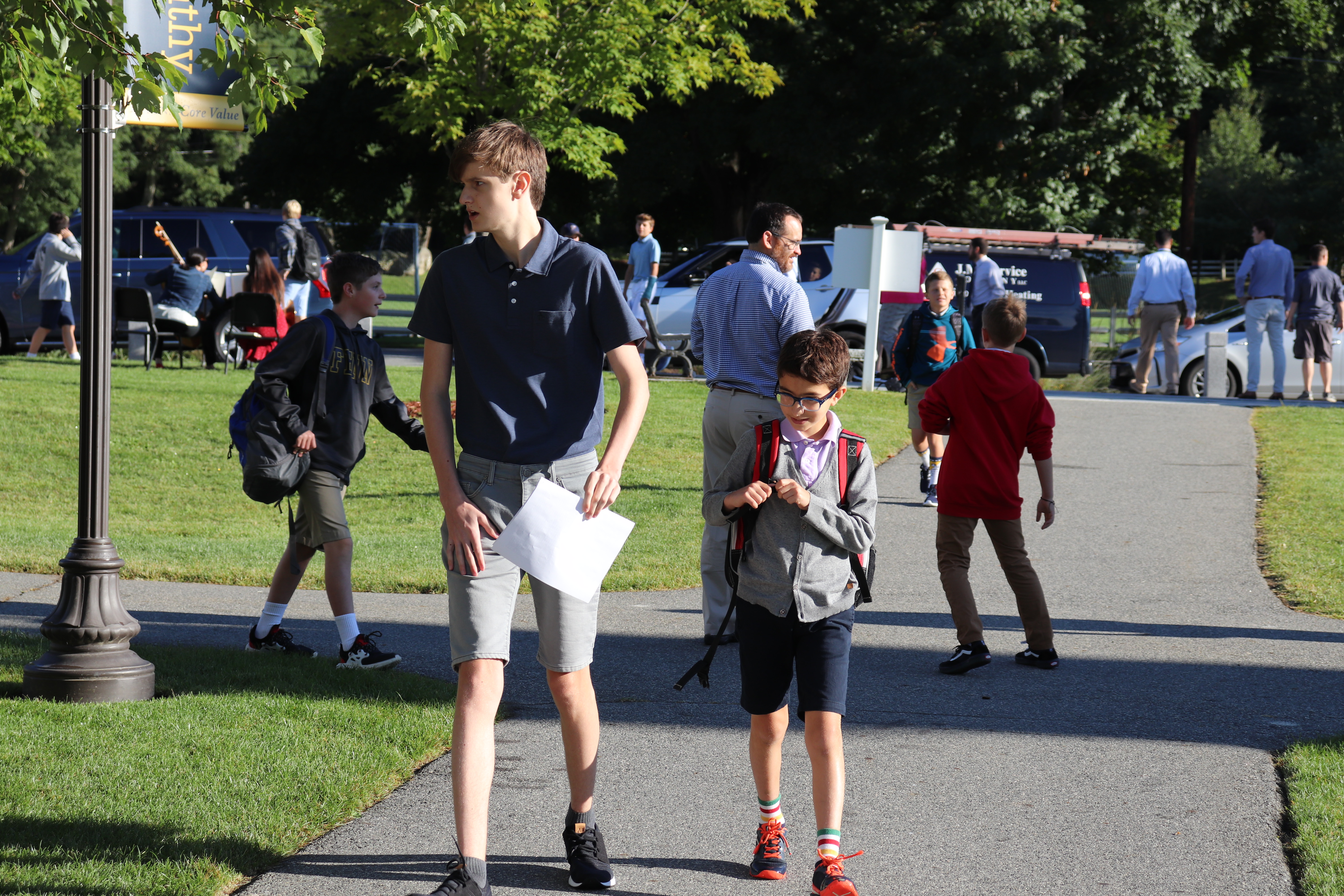 As new boys were learning how to navigate life at Fenn, returning students jumped right back into familiar school traditions. Once more, the gym lobby couches were chock full of new seniors who were proud to take their coveted spots in this prized location. Malcom Clark, one of these ninth graders, has enjoyed the start to his year. “Ninth grade at Fenn is great!” he shared. “We have more freedom, and I enjoy the smaller classes because I feel like teachers can focus on us even more. I really like English. Mr. Fitzsimmons makes English a really cool class.”

Lucas Dos Santos and Sam Elliott, now seventh graders, are both excited for their transition into Fenn’s Middle School. For Sam, he is excited to be “learning a bunch” and really enjoys his teacher. When asked what he enjoys, Lucas simply remarked, “I’m happy I’m here -- it’s been really nice!”

After homeroom, the boys all streamed into Ward Hall for the first All School Meeting, aptly kicked off with a hearty and joyful singing of the ever popular song “Yellow Submarine.” As new boys, faculty, and staff were introduced, we couldn’t help but be excited for the new memories we would make this year. Lauren Gallagher, a new Lower School math teacher, finds the “boys’ energy contagious,” helping her to “hit the ground running as soon as [she] started here!” A new fifth grader, Elijah Donnalson, pointed to “homeroom, the lunches, and the sports we play” as among his most enjoyable moments so far this school year.

After a full day of classes, Fenn’s athletic fields hosted enthusiastic student-athletes beginning their fall sports seasons. Lower-Schoolers frolicked on the fields first, tossing footballs high in the air and enjoying some pick-up soccer. Middle-Schoolers joined the fray too and were followed by Upper School sports, as determined seventh graders and former junior varsity members competed for spots on varsity teams. 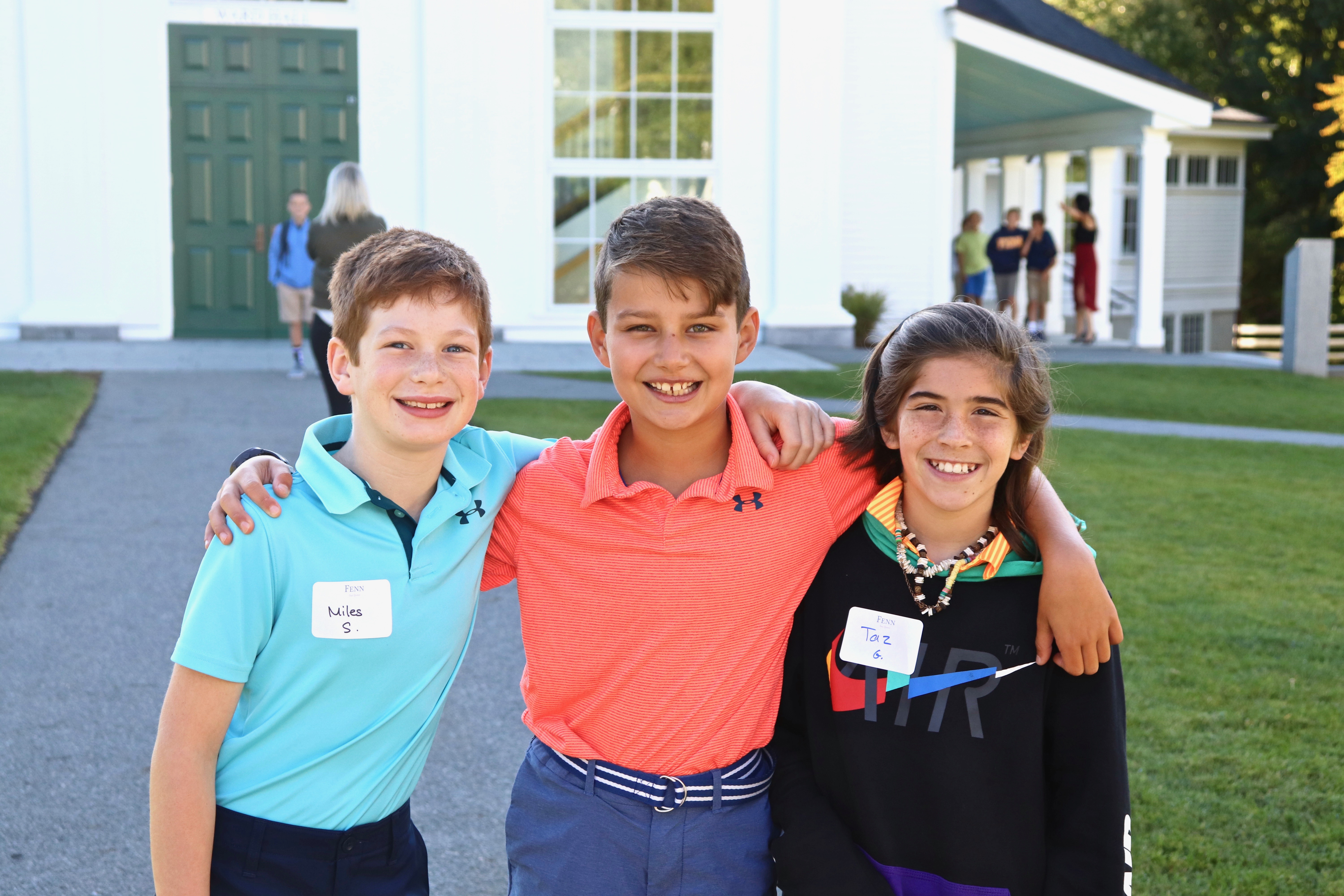 Friday’s roster of classes and athletics boasted the same energy before ushering in a fantastic and delicious “Back-to-School BBQ” hosted by the Boonisar family and bringing together all members of Fenn’s community to celebrate the start of another promising school year. Students played cornhole, gaga and other entertaining pick-up games, parents and faculty exchanged summer stories, and everyone departed for the weekend filled with blue-and-gold excitement and pride.

Ever appreciative of this Fenn spirit is Headmaster Derek Boonisar, who looks forward to forging deep relationships with students and to fostering community among the boys and between boys and their teachers. “I always eagerly await the start of a school year that will be rich with learning, leadership, and transformative experiences for all,” he shared.