A news clip of the first Martin Luther King, Jr. Day celebration in 1986 kicked off the program, displaying familiar images of African Americans and allies walking arm-in-arm, hoisting signs, and singing “We Shall Overcome.” As the clip neared its end, an unsettling image appeared on the screen: a vandalized statue of Martin Luther King, Jr., bathed in white paint as a protest of the then newly-announced holiday.

“It is clear that we still, even now, have a way to go as a society,” remarked Jimmy Manyuru, in response, as he took the podium to introduce the assembly. He went on to share that ten of the largest protests in the United States have taken place in the last 45 years, with five of those occurring within the last five years. “While there is definitely more work to do, today’s program will highlight the efforts of the many individuals – especially young people – who have been acting in the name of social justice to seek important change.” 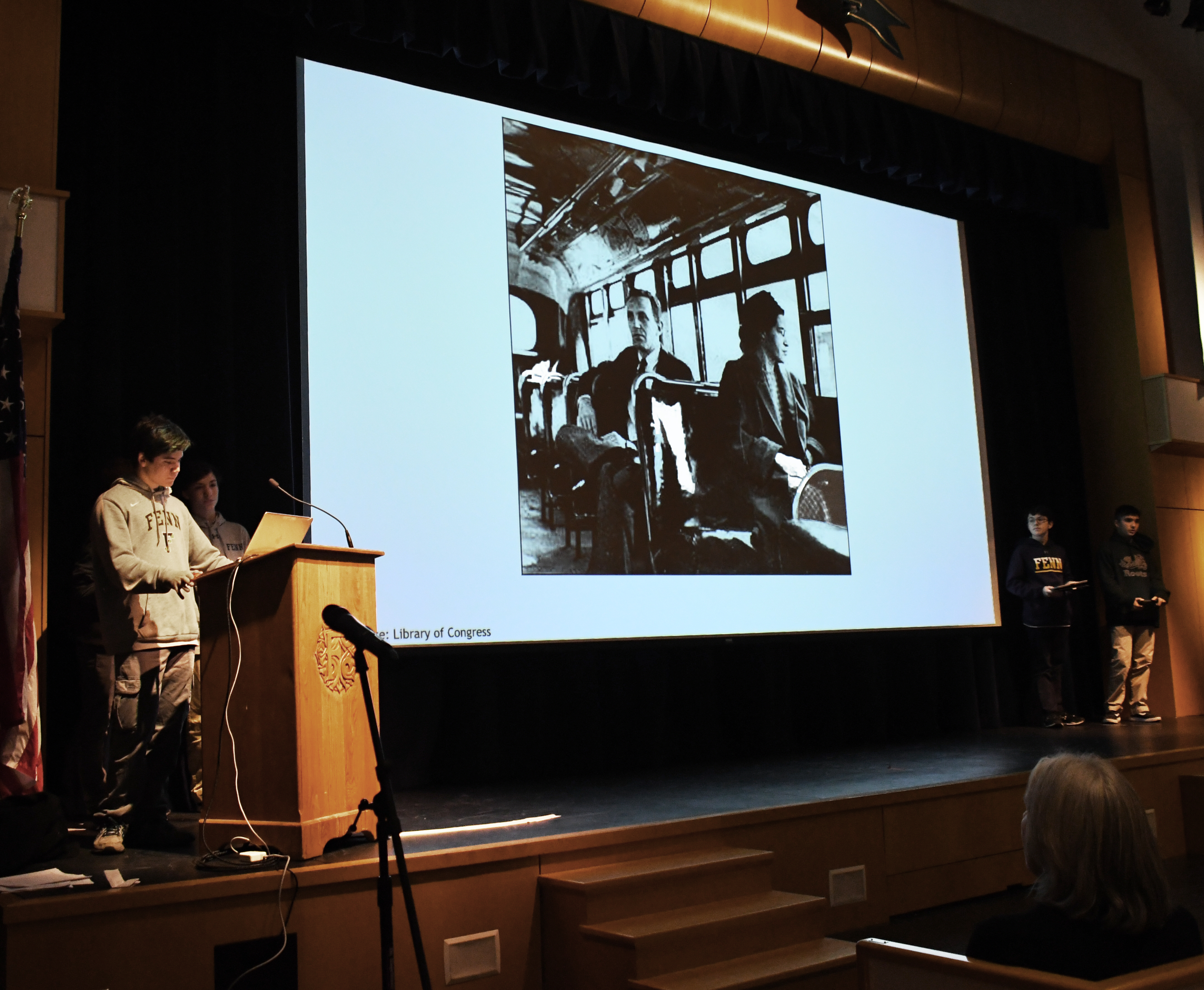 Two highlights of the program were honest and vulnerable presentations by faculty members Rob Wasielewski and Elizabeth Updike Cobblah on the actions that each has taken to explore and understand their own privilege and actively support social justice. Rob Wasielewski first addressed the culture of toxic masculinity today and his efforts to deeply explore and “unpack” what it means to be a member of seemingly dominant groups in the United States: white, male, cisgender, heterosexual, Catholic, and able-bodied.  The assembly offered a blend of similarly powerful video clips, personal perspectives from faculty and staff, and trivia led by DEI student committee members and testing the audience’s knowledge of Martin Luther King, Jr. and the Civil Rights Movement, as well as the various social justice groups and movements in existence today.

“The harm of an unquestioned privilege,” shared Wasielewski, “is that it robs the holder of the privilege of their humanity, of all the wonderful things it means to be human: to know and appreciate and fully love others.” He ended by urging the audience to question their privilege in an effort to join the fight for social justice because, “[We] see all of these injustices in the world… and they can only be changed by actions that serve justice.”

As a young girl, Elizabeth Updike Cobblah witnessed her mother’s participation in the march from Selma to Montgomery in the 1960s as a personal example of a life dedicated to social justice. After marrying Ghanaian husband, Tete, and bearing two mixed-race children, Cobblah recalled having to face her family’s occasional mistreatment because of the color of her sons’ and husband’s skin, which she struggled to understand fully as a white woman. 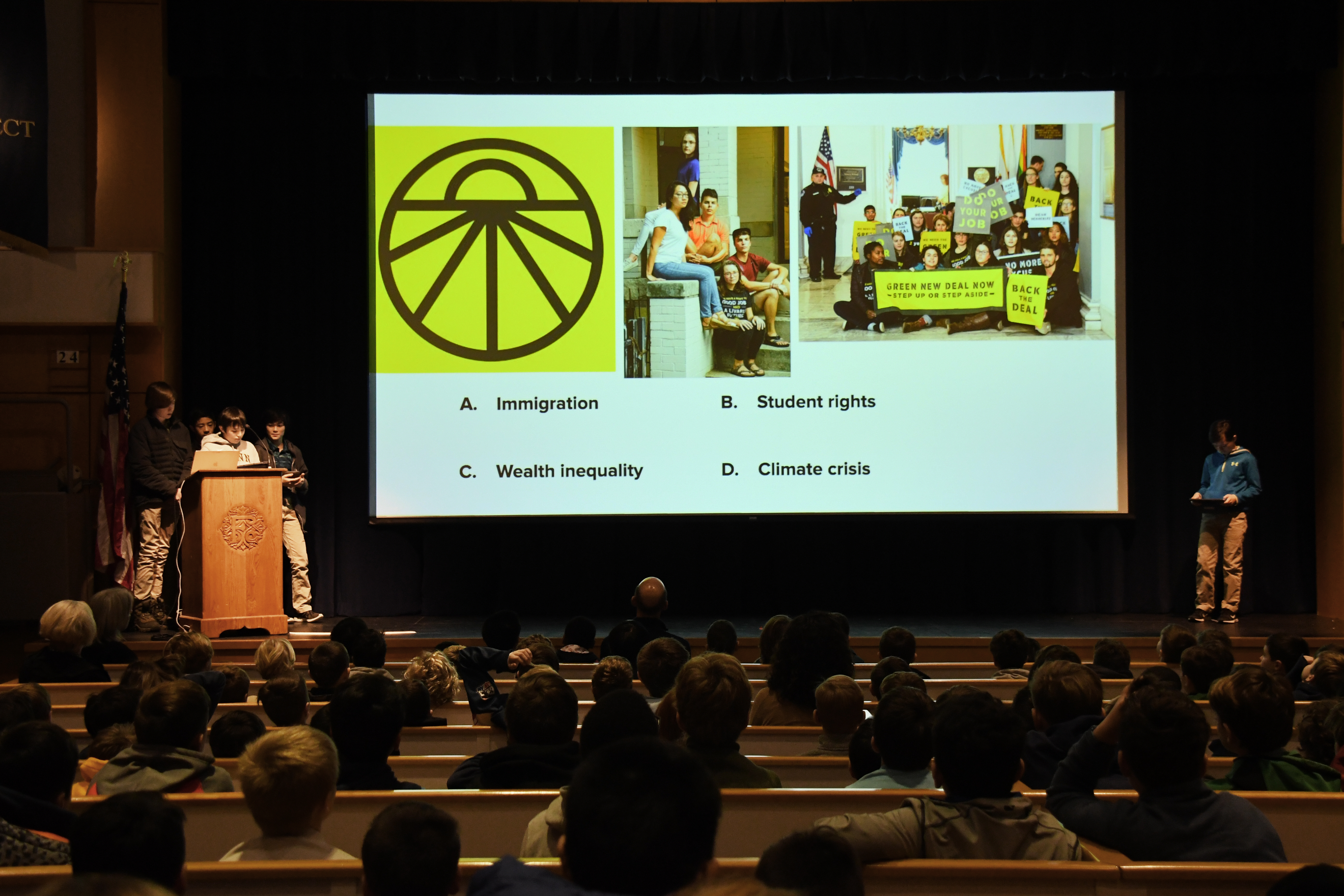 She chose to actively listen, read, and learn how she herself could stand for social justice. “America’s history (of racism) isn’t pretty, but it is what it is,” she shared. “I believe it’s my role as a global citizen to stand for others.” She concluded with a quote from Alice Walker -- “The most common way people give up their power is by thinking they don’t have any” -- and challenged the audience to develop their own social lens.

The program also provided an opportunity for students, faculty and staff to share before the audience often powerful responses to questions that the DEI team had posed to the community before the assembly. Questions ranged from “What does injustice look like to you?” to “When have you been overwhelmed with compassion or empathy?” The question -- “Mention one person or movement of courage that has impacted the way you think or act” -- yielded a variety of intriguing answers, ranging from Greta Thunberg to Jackie Robinson to Dr. King. Later in the program, the DEI team also revealed a word cloud that represented the community’s points-of-view on the most concerning national and global issues today. Global climate change was the clear leader.

In keeping with the overall theme of the program, a video for the song “Stand Up/Stand N Rock” by Hip Hop Caucus was a fitting conclusion to the assembly. Its message to stand up together and for each other to drive change was powerful and surely a message that Martin Luther King, Jr. himself had championed decades ago.