With the theme song to Chariots of Fire piped into Ward Hall and a bright screen announcing that it was The GeoBee Finals, 10 finalists spanning grades 4 through 8 marched to the stage to take their rightful seats, grab their mini white boards and erasers, and prepare to record their best answers to 35 questions in the geography competition’s first (finals) round. 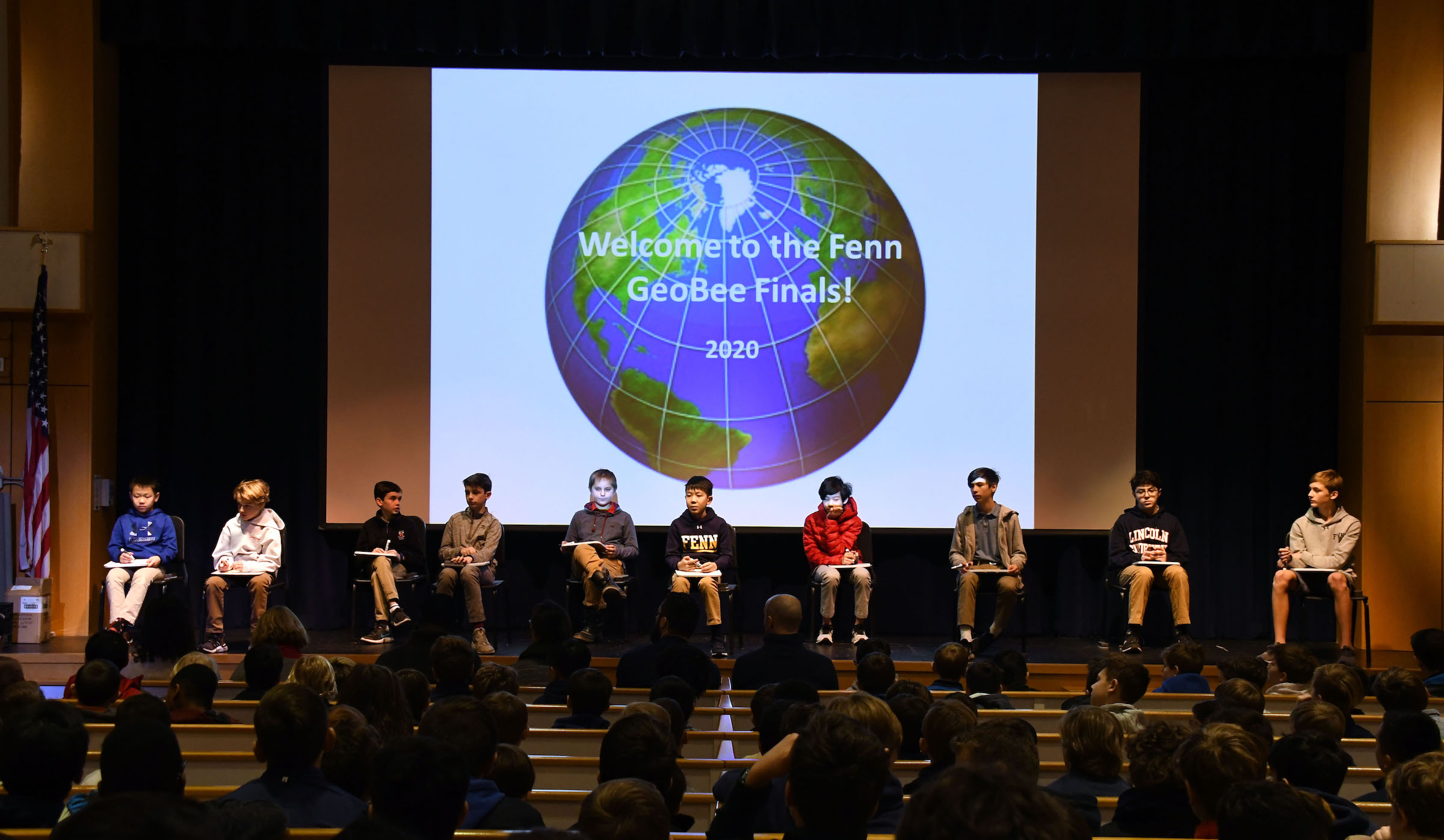 “Nathaniel and eighth grader Luca Raffa were two of the grade finalists (in the preliminary rounds),” shared faculty member Matt Ward, “but they didn’t make it to the finals. Classmate Will Simon had the highest score other than Max. So I went to them and asked ‘How do you want to decide who goes in Will’s place?’ They opted for Rock/Paper/Scissors, and Luca’s reaction was so awesome when he lost. He said, ‘Okay, Nathaniel, you’re going to be great’ and gave him a big hug. It was a really cool moment to witness.”

During the finals, contestants—including “lucky” Nathaniel—were asked to name the states, countries, continents, bodies of water, etc. that were described in myriad questions. Which country is the second largest exporter of fresh cut flowers? That would be Columbia. One hundred species of butterflies were identified in the Great Dismal Swamp between Virginia and which other Atlantic state…? North Carolina! And the Sinai Peninsula belongs to which country…? Egypt, of course. And the list of questions went on, prompting quizzical looks on some faces and occasional fist pumps when contestants knew they were about to ace an answer.

As each question was read, boys captured their best answers on their personal white boards before lowering them to their laps to give the Ward Hall audience an opportunity to answer. Judges then viewed contestant answers and scored them accordingly. The judging panel of Social Studies teachers was dismissed from the hall to calculate their scores and determine the top two high scorers once all 35 questions were covered. 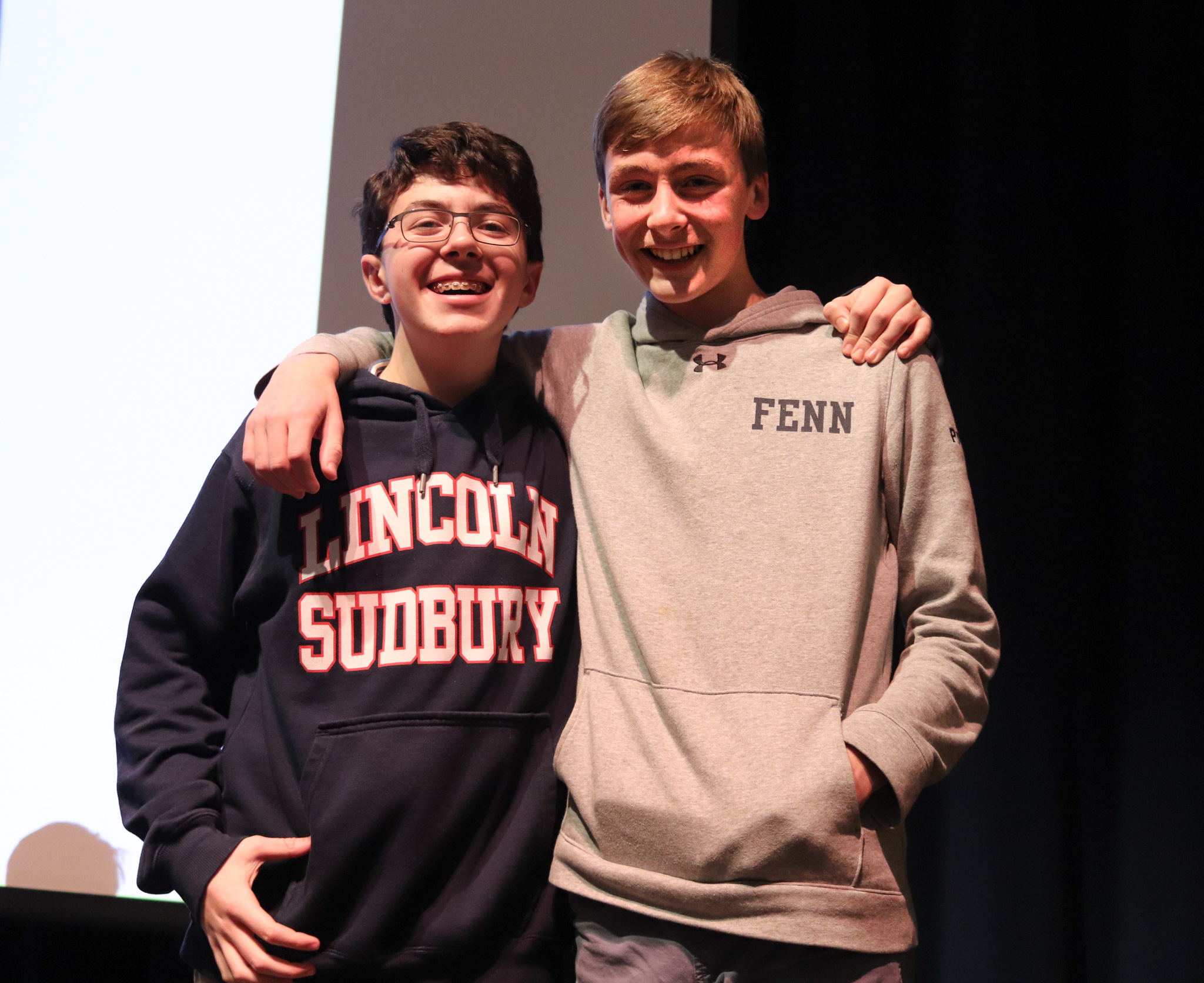 Before long, the judges emerged with news that eighth graders Max Troiano and Nathaniel Pynchon had secured their spots in the championship round of three questions. The first two questions were answered successfully by both boys before Max emerged victorious with a correct answer to the third and final question, securing his place as a three-peat winner of Fenn’s GeoBee contest.

“This is the first time I can remember having the same person win three times in a row,” shared John Sharon. “Max’s understanding of the world is just remarkable. He has a really good chance of making it to the final round (in the upcoming state competition).”

Max himself added, “In sixth grade, I got seventh place out of 100 contestants in the States, and last year, I came in at about 20-25 out of 100. I think I’ll make it to States this year, but I’m not sure how I’ll do. I just really enjoy [geography]. When I was younger, I would literally pour over maps.”

And pouring over maps is again what Max may be doing in the coming days as he prepares for an online test of approximately 70 questions to attempt to qualify for the state competition. The top 100 scorers are invited to the state finals, as Max has been for the past two years. Qualifiers for the 2020 National Geographic GeoBee State Competition will be announced on March 2, 2020.

Best of luck to Max Troiano as he strives to earn this honor for a third time!